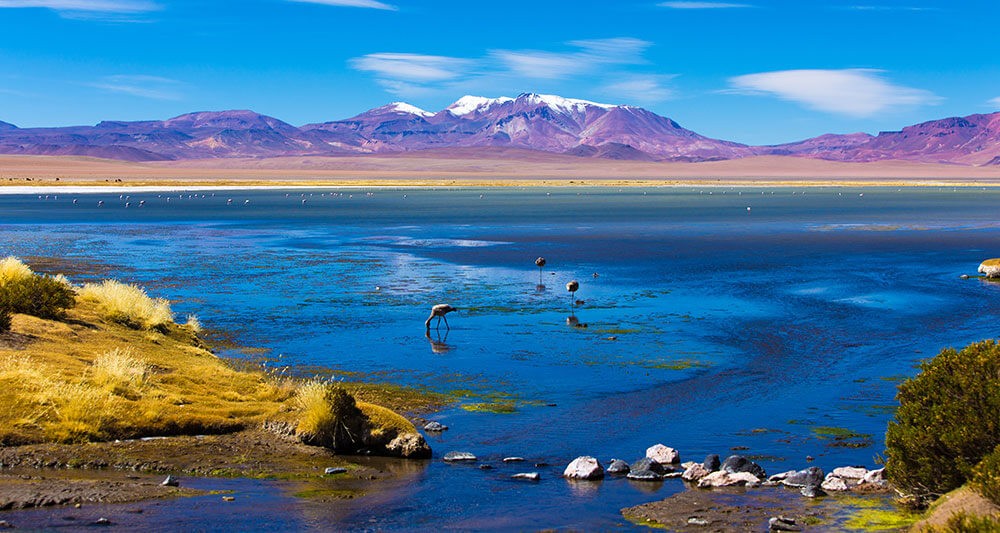 Since the adoption of the Convention on Wetlands in 1971, World Wetlands Day has been celebrated annually on February 2 to mark the occasion— that’s more than 45 years! The first meeting was held in the Iranian city of Ramsar, and the Standing Committee of the Ramsar Convention on Wetlands has overseen the yearly celebration ever since.

Beginning in 1997, the Convention also has attempted to raise public awareness about the annual event (and wetlands broadly) by providing outreach materials and developing themes that highlight the “vital roles of healthy wetlands,” from supplying all our fresh drinking water to the rich ecosystems that support abundant and often rare flora and fauna. Today, there are 169 countries (mostly U.N. member states) around the world committed to the three pillars of the convention:

The theme for World Wetlands Day 2017 is Disaster Risk Reduction in an attempt to evangelize the importance of wetlands in “reducing the impacts of extreme events, such as floods, droughts and cyclones on communities.”

More broadly, the mission of the Convention on Wetlands is “the conservation and wise use of all wetlands through local and national actions and international cooperation, as a contribution toward achieving sustainable development throughout the world.” They use a fairly broad definition of wetlands that includes coral reefs, mangroves, coastal areas, tidal flats, deltas, estuaries, oases, peatlands, web grasslands, marshes, swamps, underground aquifers, lakes, rivers and even some manmade sites like salt pans.

Lucky for us, many of these diverse and productive ecosystems are found throughout Latin America. Whether you’re looking for an active adventure, a cultural journey or just want to catch a glimpse of these magnificent and endangered areas, there are plenty of breathtaking wetlands to put on your list.

For a bit of travel inspiration, here are our Top 10 Wetlands of Latin America: 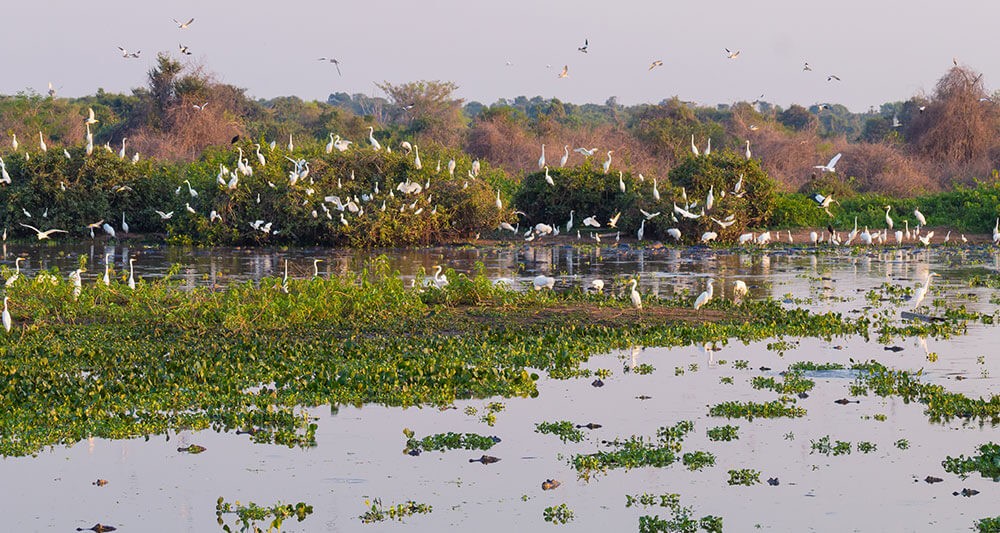 At 81,000 square miles, The Pantanal is the world’s largest wetland, extending across Paraguay, Bolivia and Brazil. Although not nearly so famous (or as large in terms of total area) as its more well-known neighbor, the Amazon basin, this huge seasonal floodplain plays home to a truly astonishing potpourri of wildlife and plants, as well some pretty flawless terrain, including tropical forests, savannas and flooded grasslands. Often said to be the best preserved wetland on Earth, the Pantanal also boasts the most substantial concentration of wildlife in all of South America, including particularly rare inhabitants such as the marsh deer, hyacinth macaw, jaguar and giant river otter. It is for this reason, many travelers choose to visit here instead of the nearby Amazon basin. The area is threatened by human development and unregulated tourism. 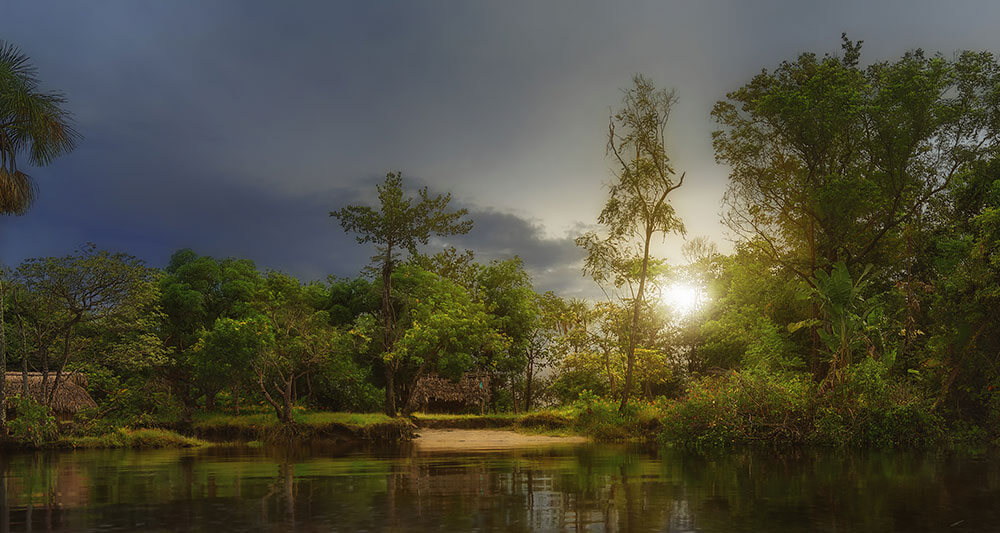 Part of the vast Orinoco River Delta, which lies mostly in Venezuela, Colombia’s Llanos is some of the planet’s most ecologically diverse tropical grasslands simply teeming with wildlife. Often referred to as “cowboy country,” a trip to Llanos will have you face-to-face with at least 100 mammal species and more than 700 bird species. To put it in perspective, that’s almost as many birds as can be found in the entirety of the United States! The massive Orinoco River, with the third biggest flow on the planet, lies at the very heart of the landscape here, causing seasonally flooded plains to merge with costal mangroves and a delta of swamp forest. Endangered wildlife in the region includes the huge Orinoco crocodile, which can get up to 23 feet long, as well as the black and chestnut eagle, the giant otter and armadillo and the Orinoco turtle. The area is threatened by commercial agriculture and cattle farming. 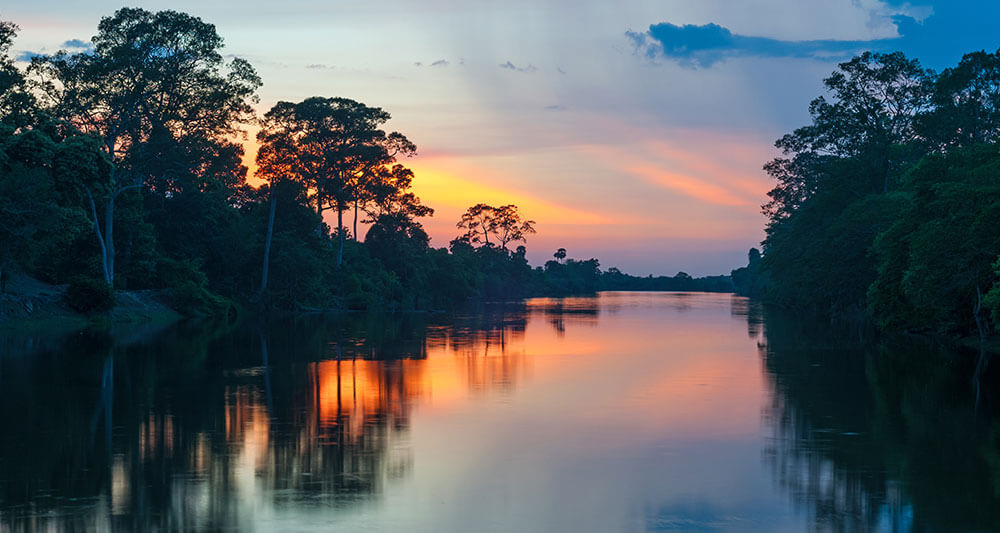 At almost three million square miles (that’s twice the size of India for anyone who counting), the Amazon River Basin is the world’s most famous wetlands. This region boasts profound seasonal changes, which means visitors will get completely different experiences in the fall than in the spring! The mighty Amazon River and its many tributaries are home to a wide range of habitats, including marshes, swamps and more, and each of these include a wildly diverse variety of wildlife. The Amazon River holds the record for volume, and it is said that nearly one-sixth of all the world’s ocean water comes from the fresh waters of the Amazon. Although 1,200 new species of vertebrates and plants were identified here in the decade between 1999 and 2009, the Amazon is most interesting for its 30 million indigenous human inhabitants. The region, which spans parts of Brazil, Peru, Colombia and several other countries, is amazingly fragile and has lost nearly 20 percent of its forest cover in the last 50 years. 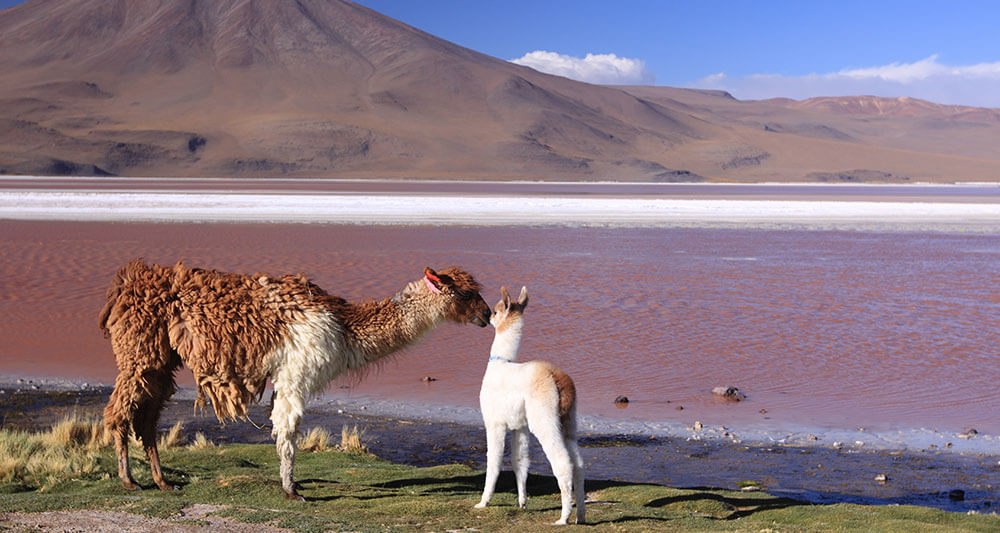 A UNESCO Biosphere Reserve in the northwest region of Argentina, the puna ecosystems of Catamarca (known locally as Lagunas Altoandinas Y Punenas de Catamarca) are part of the high Andean wetlands. The area is home to bogs, marshes, lagoons and a myriad of lakes that form an important ecosystem for some of the world’s most precious and beneficial wildlife and plants, as well as provide fresh water to some 100 million people living in the region. The Catamarca Reserve is widely known as the best place in the world to see large populations of both Puna and Andean flamingoes (between six and 18 percent of the world’s population lives here), but there are other endemic species that make this distinct wetland worth a visit as well. The Andean cat, short-tailed chinchilla, giant coot, crested duck and Andean avocet also call Catamarca home. Unfortunately, high Andean wetlands are very fragile and vulnerable to mining, flamingo egg collection, overgrazing and unregulated tourism. 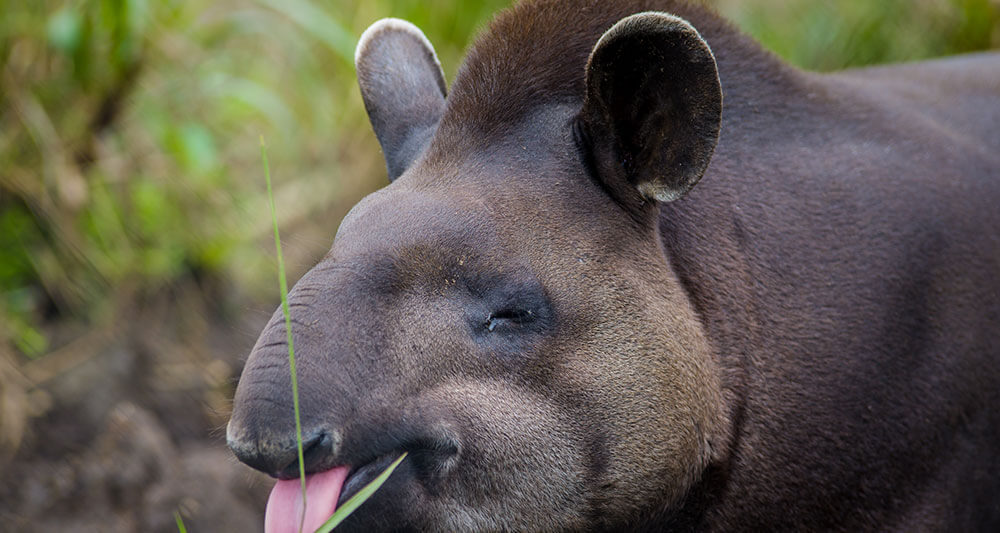 Situated in the south wild Toledo district near where Belize meets Guatemala, lies a well-kept secret most travelers to this tiny Central American country never see— Sarstoon Temash National Park. At 65 square miles, this small park is a complex of amazing ecosystems that pack a big punch. There are both permanently- and seasonally-flooded forests spanning the corners of the park. These predominate the landscape before being spotted by swamps, inland lagoons, the country’s biggest and most undisturbed stretch of red mangrove and lowland sphagnum moss bogs you’ll only find in this part of the world. Hiding within this unusual back country are numerous endangered species, including the Morelett’s crocodile, the West Indian manatee, the Hickatee turtle, tapir and black howler monkey whose haunting call permeates the forest. Don’t forget to make time to visit the indigenous Quechua and Garifuna tribes while in this region— both live in the vicinity and attach cultural importance to the wetlands. 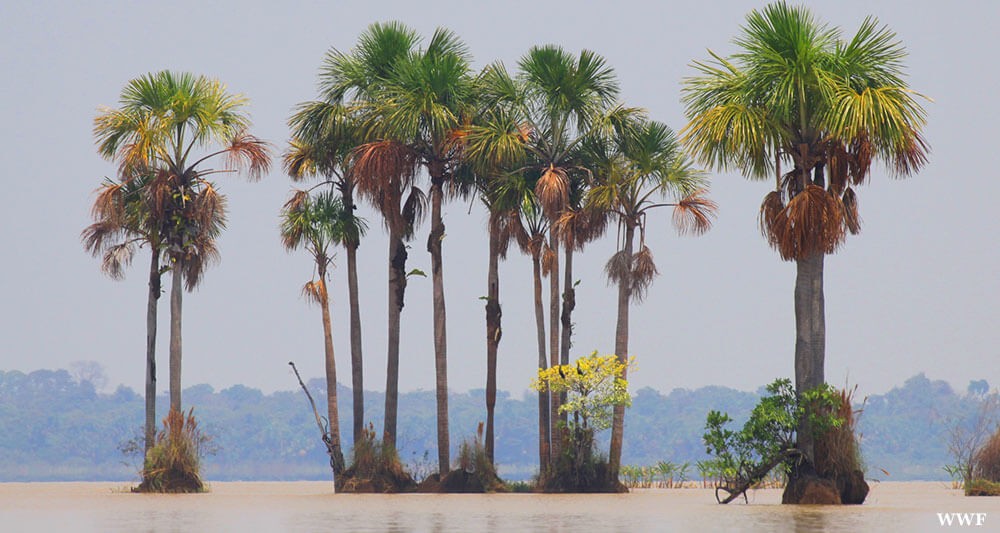 You might be surprised to learn Bolivia has the most acreage under Ramsar protection. The South American country surpassed Canada in 2013 with the addition of three new wetlands, including Llanos de Moxos. Moxos is an tropical savannah near the borders of Bolivia, Peru and Brazil that is about the size of North Dakota and considered to be vital to the health of the Amazon basin. In fact, the three main rivers snaking through the region (the Itenez, Beni and Mamore) become the Madeira, which is a major tributary to the Amazon. Like many other wetlands on our list, Moxos experiences cyclical floods and droughts and plays host to a jaw-dropping array of flora and fauna. To date, nearly 600 bird species, more than 130 mammals, 100 reptiles, 60 amphibians and a minimum of 1,000 plants and 600 fish have been documented here. Some of the more critically endangered species include the Bolivian river dolphin and the giant river otter. 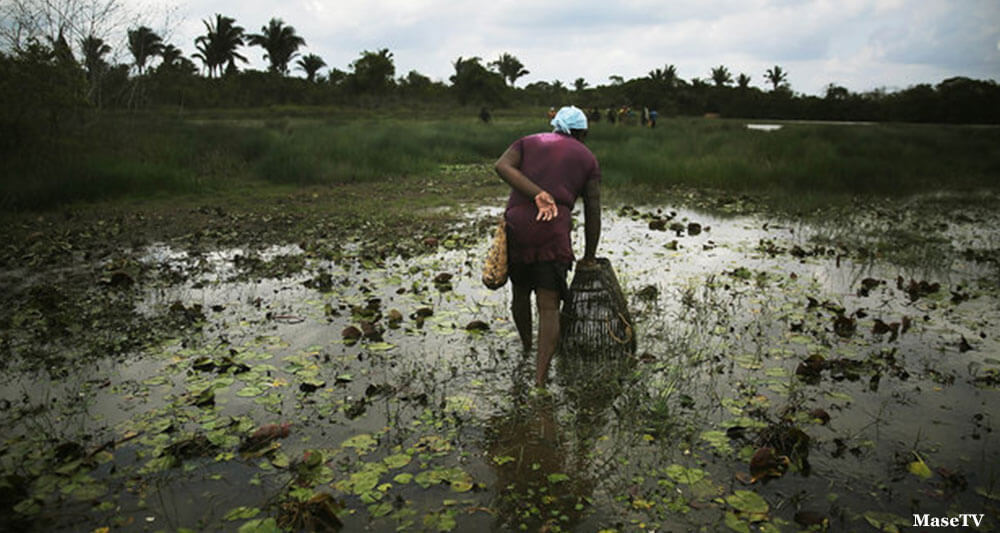 The Baixada Maranhense Environmental Protection Area along Brazil’s northeast coast is sparsely populated and boasts extremely limited ecotourism in an effort to preserve the local environment. It also stands apart from its Amazon and Pantanal neighbors for its seafront location along the coast of Maranhao state. At 11,000 square miles, these expansive seasonally-flooded coastal forests, swamps, mangroves, plains and lowlands experience heavy rain from December to June, creating little islands peaking from the flooded plains and forcing marine salt far inland via rivers and smaller estuaries. The area is a haven for migratory birds, as well as a number of common mammals. A few of the numerous endangered species found here include the West Indian whistling duck, the West Indian manatee, the pearly parakeet and the wattled jacana. Although the conservation area is heavily regulated, human destruction due to fish farming, hunting and solid waste continues.

Just outside the quaint town of San Pedro de Atacama, Chile lies a nearly 500-square mile nature reserve in the Andean puna region called Los Flamencos National Reserve. Within this dry landscape are two salt flats, including Tara salt flat and the high altitude Aquas Caliente. Tara was designated a Ramsar Wetland of International Importance in 1996 for its permanent and seasonal lakes that make up a sort of high altitude wetlands soaring nearly 5,000 meters above sea level. Frolicking through the alternative flat and hilly terrain (even boasting a few volcanoes), visitors will find rare animals such as the Darwin’s rhea, the vicuna and the viscacha, as well as many vulnerable species including all three types of flamingoes (James, Chilean and Andean), the Andean goose, the tawny tuco-tuco, the Andean gull and the Andean fox. 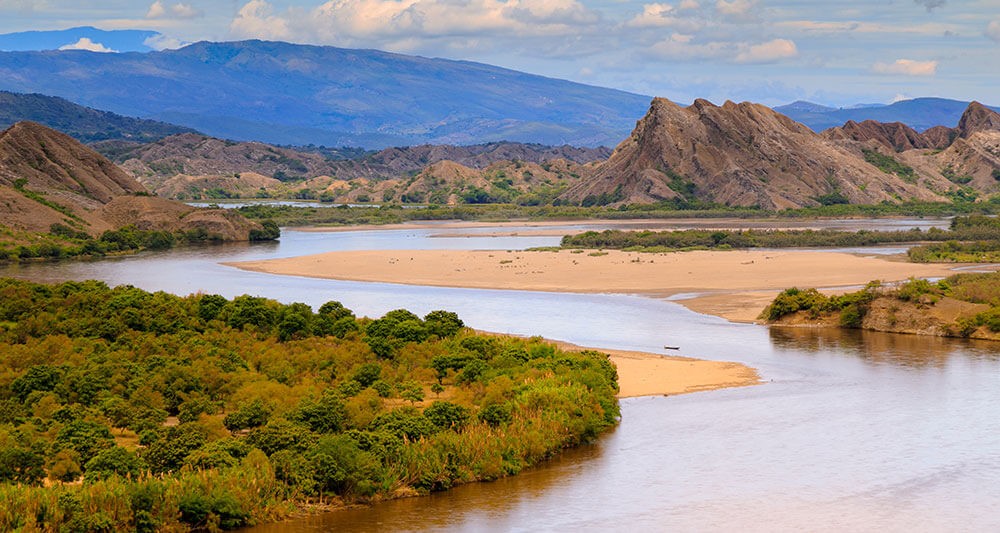 The Magdalena is the central river of Colombia, flowing nearly 1,000 miles from the mouth of the delta with its shifting sandbars north through the western half of the country. The majority of Colombia’s population lives within the Magdalena River Basin, which at 105,000 square miles, encompasses almost a quarter of the country’s total area. Although the river’s path takes it through highly diverse ecosystems (from wetlands and swamps to dry forests and rain forests), it is the coastal estuarine system that has been included in the Ramsar Conventions, and it’s easy to see why. Here, visitors will find abundant rivers, lagoons and mangroves along the Caribbean coastline. Near extinct species, such as the red-footed tortoise, Dahl’s turtle, West Indian manatee and Magdalena tinamou among others, can be spotted here. Also keep your eyes peeled for imported hippos (you read that right). The site is partially state-owned and partially private-owned. Commercial fishing and agriculture threatens conservation efforts, and ecotourism is still in its infancy here. 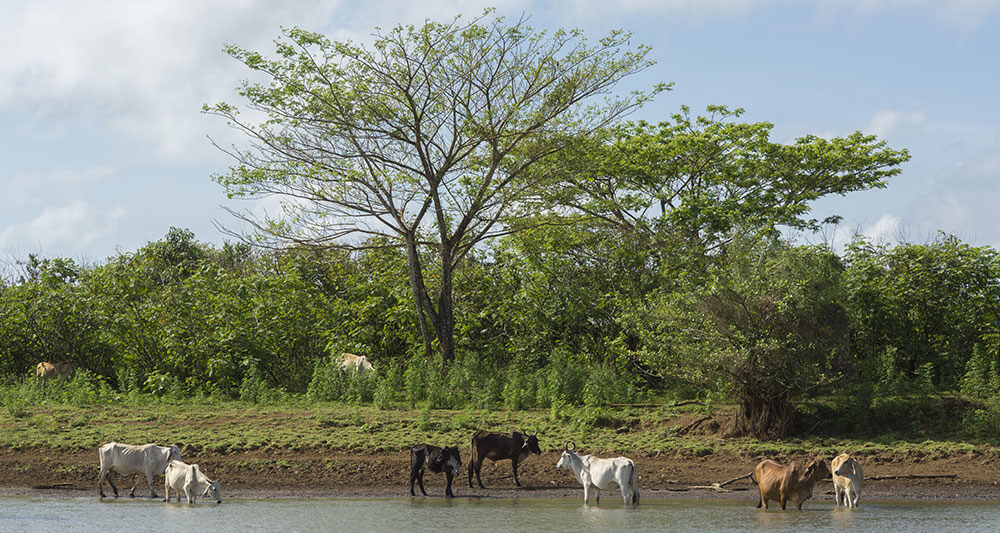 Just a stone’s throw from the Nicaraguan border you’ll find Costa Rica’s Cano Negro National Wildlife Refuge— one of the most important wetlands in the world. The Rio Frio (or Cold River) is the main water source for the area, as well as the biggest river for some miles. No two trips to Cano Negro are ever alike, and the ebb and flow of the Rio Frio from wet to dry season is the catalyst for the ever-changing environment. In the dry season, roads can be traversed via truck and only a sole lagoon ultimately remains, making for astounding bird watching. During the rainy season, on the other hand, boats are the preferred way to get around as the rising water levels cover the basin. Cano Negro is a vital location for numerous migratory birds, and more than 200 species can be found in the park. Other wildlife includes tapirs, jaguars, guapote and many more.

If you’re ready to get your feet wet in the wetlands of Latin America, contact us today to begin planning your dream journey.