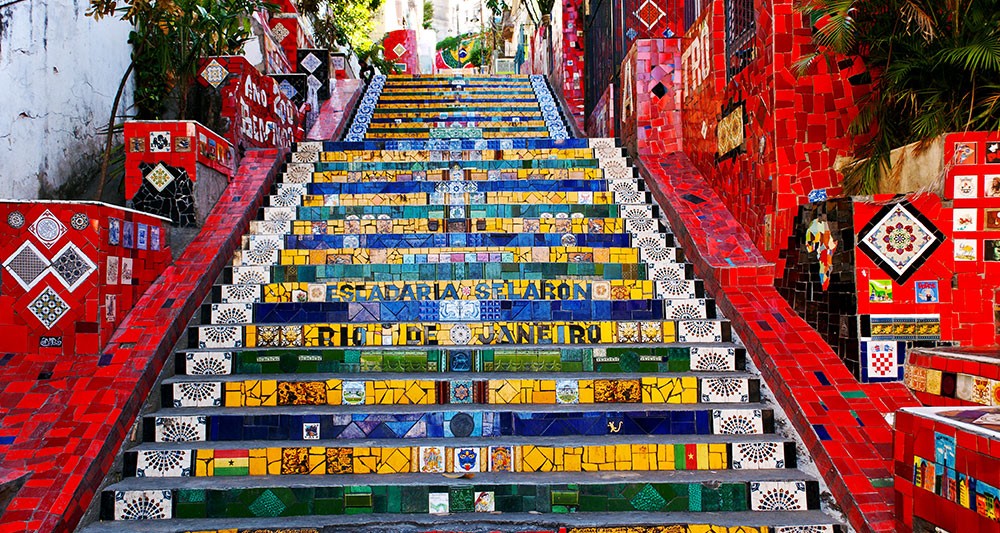 Stretching from the Argentinian and Uruguayan borders in the south to the massive Amazon Basin region in the north, Brazil is the world’s fifth biggest country and the largest nation in South America in both size and population.

Although no longer the country’s capital, the bustling coastal metropolis of Rio de Janeiro remains its second most populous city, renowned for its white sand beaches, raucous Carnival and monolithic statue.

No trip to Rio is complete without experiencing a healthy mix of iconic tourist destinations, legendary carioca culture and authentically laid back eco-adventures. Whether it’s your first time in Rio or your 10th, here is our list of Top 10 Can’t Miss Stops (in no particular order):

Copacabana may not be the most pristine or secluded beach in Brazil, but it is one of the world’s most famous and definitely not to be missed. Running for three miles of Zona Sul, Copacabana is an eclectic and animated frenzy of activity that truly never sleeps. From early morning fisherman pulling in nets and nightclub partiers finally heading home, to afternoon football games and late night fireworks, it’s easy to see why locals and tourists alike flock to Copacabana. While you’re in the area, be sure to take the five-minute stroll to Ipanema and check another renowned beach off your list.

Known primarily as the dance of famed Rio Carnival celebrations, samba is the heart and soul of Brazilian dance, music and culture. The groove originated in Brazil, stemming from Afro-Brazilian roots but, today, is highly ingrained, crossing divides and connecting people throughout the country. Find out for yourself how much sexy foot tapping fun the samba can be when you take a samba lesson in the samba capital itself— Rio! Once you’ve gotten a lesson, head to Lapa and its iconic nightclubs (like Arcos da Lapa, Carioca da Gema or long-time fave Scenarium) to try out your new skill with the locals.

While visiting the bohemian Lapa neighborhood, be sure to take a stroll up the quirky and colorful ceramic tiled Escadaria Selarón stairway created by Chilean artist Jorge Selarón as a tribute to the Brazilian people. The 215-step staircase was the artist’s life’s work after moving to Rio in the 1980s and was located near to his long-time home. He made the previously dilapidated stairs his DIY reno passion, but the 65-year-old artist was found dead on the stairs, located at the corners of Silva and Pinto Martins Streets, in 2013. His work has been internationally recognized and is a truly iconic attraction.

No matter where you’re traveling, there really is no better gauge of the local culinary culture than authentic street food. Keep a look out for a long line of locals queuing outdoors, and you’ve likely found the real deal. In Rio, locals love their food almost as much as they love their beach culture, and they never drink on an empty stomach, so street fare is abundant. Favorites include churrascaria (Brazilian BBQ), feijoada (stew), tapioca (stuffed crepe/pancake), pastels (stuffed meat breakfast pastries), empadas (savory fried bite size treats), quiejo coalho (skewered cheese) and sacolé (fresh fruit popsicles) and acaraje (fried bean patties with shrimp, chile and tomato).

Built for the 1950 World Cup, Estacio Maracana was intended to be the biggest stadium in the world and holds the record for the largest attendance in football history at almost 200,000 people. It was remodeled for the 2014 World Cup in Brazil and has been officially renamed, but the legendary stadium still plays host to the quintessential Brazilian “beautiful game” experience— complete with flares, drums and heart-pounding football chants— and it’s doubtful anyone will ever call it anything but Maracana. It’s an intense viewing experience for true fans. If it seems too much, maybe catch one of the local pick up games on Copacabana beach instead.

One of the New 7 Wonders of the World, the nearly 125-foot tall Christ the Redeemer monolith is an art deco style soapstone carving of Jesus perched atop the summit of Corcovado Mountain just outside Rio. In fact, Maracana stadium sits in its shadow. Constructed from 1922 through 1931, it is the largest art deco statue and second largest Christ statue in the world (Poland’s Christ the King takes first prize) and has been restored several times due to weathering and lightening strikes. Sure, it’s one of the most populous tourist stops, but that doesn’t mean you should miss it!

Although many tours combine Christ the Redeemer with Sugar Loaf, it is important to note that the giant statue of Jesus is not located on Sugar Loaf but on Corcovado Mountain. In fact, locals don’t even think of Sugar Loaf as much more than a hill (Corcovado is nearly twice its size). Alternatively, Sugar Loaf is located on the largest bay in Rio— Guanabara Bay. Sure, you can walk up Sugar Loaf, but why would you when you can take the iconic cable car (operating since 1912) for such a nominal fee?! After taking in the stunning vistas, be sure to stick around and enjoy Praia Vermelha for a bit too.

Experience the culture of Brazil and the “other side” of Rio like a local on a tour of the city’s favela (or shanty towns) with a native guide. It’s easy to stay at the high-end hotels, lounge at the beaches and check out the tourist centric destinations, but there is no better way to get up close and personal with the city’s genuine people and cultures than touring the favelas. While here, we recommend visiting local schools, markets and social projects so you can experience life through the eyes of the local community and learn firsthand what it means to live in the Rio’s lowest income neighborhoods.

Has anyone ever in the history of travel not wanted to seek out unique handmade arts and crafts? In Rio, the open air markets are the place to find everything from semi precious gems and local art to sarongs and bikinis.  Feira Hippie de Ipanema is one of the larger street markets and is a great destination for tourists to find cool gifts and souvenirs. It is open on Sundays from 10am through 7pm. Alternatively, the smaller O Mercado Estilistas Independentes is a market for independent artists, where you’ll find creative gifts at great prices, including apparel, handmade notebooks and more. The location and dates vary, so check out their web site. Hours generally are 2–9pm.

Perhaps one of Rio’s best kept secrets, the City Park at Niteroi is an environmentally-protected area with sweeping vistas of Rio de Janeiro— thought to be among the best views of the bustling city below. For the brave traveler, an even better view from a guided parasail. You’ll get a bird’s eye view of the other nine can’t miss Rio attractions, including up-close aerial looks at Christ the Redeemer, Maracana, Sugar Loaf, Copacabana and more. If you take the plunge, you’ll never want to plant your feet back on the ground, but even if you can’t make the jump, the views from the park are still well worth the trip.

If you’ve been inspired to immerse yourself in all Rio de Janeiro has to offer, call us today to discuss travel. Remember, there’s no time like the present with the relaxing of Visa requirements for U.S. and Canadian citizens.