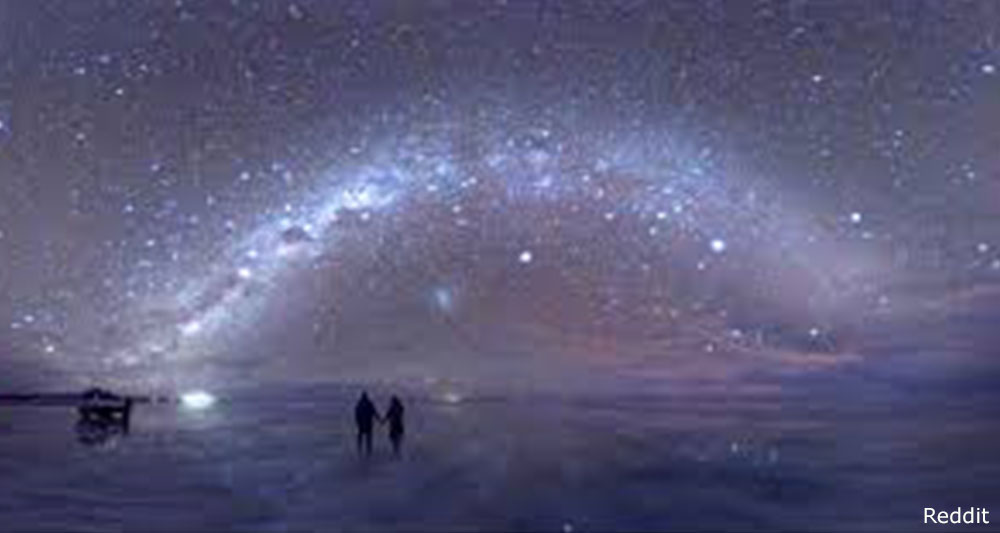 10 Best Spots to Stargaze in Latin America – Astronomical tourism didn’t begin with the rise of sustainable journeys in the 1970s. In fact, stargazers have been traveling to view dark skies for centuries. Today, however, as the number of humans living in light polluted cities increases and the cost of powerful home telescopes declines, astronomical tourism has become its own freestanding travel segment quickly gaining popularity.

Not only is there a mounting body of evidence that getting out of the city to stargaze is good for us, it’s also a heart-meltingly romantic experience for couples and an educational one for families.

There are a number of picture perfect locales across the globe that are suitable for stargazing, but with the rich astronomical history of the ancient Maya and Aztec civilizations in Central and South America, stargazers in this region get an added bonus when relaxing under the night sky.

Both ancient civilizations linked religion to astronomy and used extraordinarily accurate calculations to chart seasons, develop calendars and plan city locations and layouts. Driven by a deep-rooted belief in the order of the universe and its cycles, they did all this with only the naked eye and, perhaps, the most rudimentary of instruments.

Given this, it may be more than mere cosmic luck so much of the world’s best stargazing is found in the cradle of these two great civilizations. After all, former Harvard astronomer Bart Bok did famously exclaim, “All the good stuff is in the Southern Hemisphere!”

He wasn’t kidding! From the star clusters of the Southern Cross and nebulae of Sagittarius, to the interstellar gas of Carina and galaxies of the Fornax Cluster, there’s no better place to indulge your astro geek— especially come winter, so pack your favorite pair of binoculars and hit the road!

Here are the 10 Best Spots to Stargaze in Latin America: 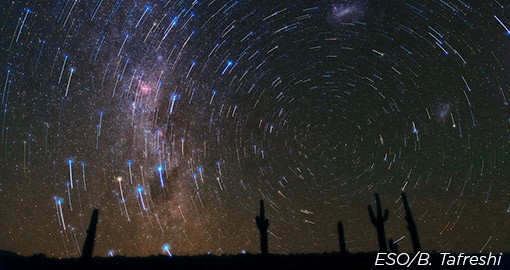 Generally regarded as the best stargazing in the world, the Atacama Desert boasts high altitude, virtually no cloud cover and extremely dry weather patterns. This unique combination has made it a major destination for astronomical research and tourism and garnered it many super observatories. Neighboring San Pedro is a well-known home base for astronomers venturing out to see some of the clearest night skies on Earth, so expect to rub elbows with some pretty serious skywatchers. 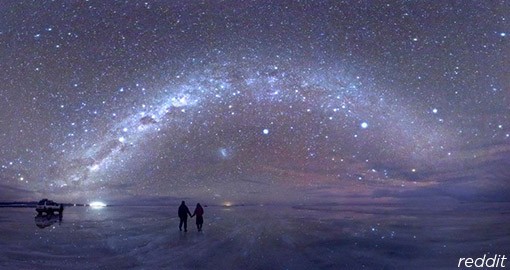 This perfectly flat, almost lunar landscape is a relatively easy drive from San Pedro, Chile, making it the perfect second stop on a Latin American stargazing trip. Harsh and unforgiving, the Uyuni Salt Flats were once a prehistoric lake that dried up, leaving the largest salt flat in the world with 4,000 square miles of reflective white surfaces and a wide horizon perfect for stargazing. In the dry season, it looks a bit like a scene from “beyond the wall” in Game of Thrones, but its salty ground cover is highly reflective and act almost as a mirror for the night skies above. 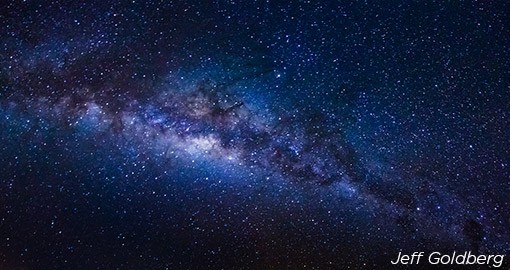 As we’ve pointed out before, the Galapagos Islands topped USA Today’s 10Best Readers’ Choice awards for bucket list trips thanks to its UNESCO World Heritage site status and unique ecosystem. But, this archipelago is also a stargazer’s paradise with literally zero light pollution and equatorial positioning where travelers can see the skies of both hemispheres. For optimal viewing, take a luxury cruise and ask the captain to turn off the ship lights while out at sea. Most of the yachts in the islands have naturalist guides to help light the way. 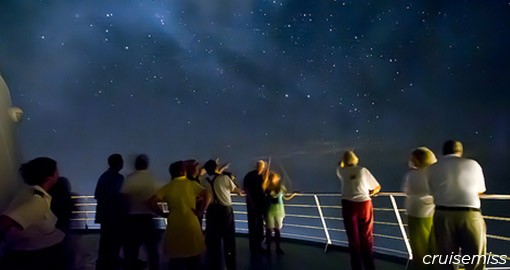 As in the Galapagos Islands, sailing the calm waters of the Caribbean Sea is the perfect place to skywatch thanks to its unspoiled and uninterrupted dark skies and overwhelming tranquility. Experts say stargazers should try to get at least 5-10 miles off shore to minimize light pollution, but 25 miles or more and you will get truly dark skies. Try to plan your trip when the moon isn’t full, then lay back on deck and you’ll feel like you can reach out and touch the stars around you. Head out from Belize, Guatemala, Costa Rica, Panama or Colombia on your Caribbean stargazing voyage. 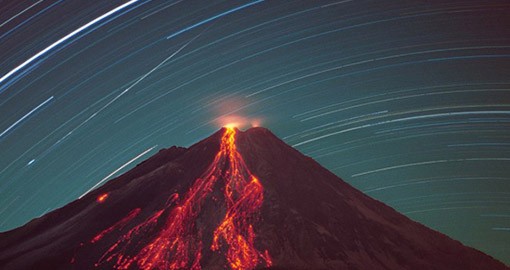 For a spectacular light show like nowhere else on Earth, head to La Fortuna near Costa Rica’s Arenal volcano. Here, the surrounding landscape of one of the world’s largest and most active volcanos plays adds to the experience, offering stargazers an awe-inspiring combination of active lava flows on land and crystal clear winter skies for some amazing skywatching. This small village is one of the few places in the Northern Hemisphere visitors can see the Magellanic Clouds, two dwarf galaxies first located by Magellan. Get there early to see the characteristic red sunset created by the volcanic flows. 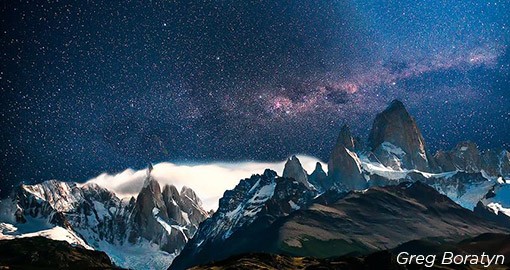 Amidst the snowcapped Andean peaks of Patagonia, the cloudless winter skies make for some of the easiest stargazing on Earth. Although the skywatching is difficult to beat when the skies are clear, the cold, unpredictable weather mean Patagonia isn’t always a safe bet, but when it’s good— it’s nearly unbeatable. Fortunately for travelers, the natural landscape of this pristine wilderness, with its glaciers, lakes, mountain passes and unique wildlife, make it well worth the trip even when stargazing isn’t ideal. 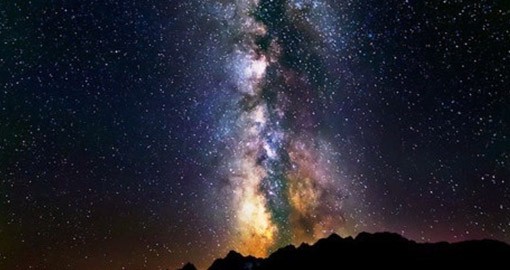 Magical, tranquil and simply overflowing with Peruvian folklore, Lake Titicaca was a spiritual center of the ancient Inca civilization. It’s the world’s highest navigable lake, and its high altitude surrounded by the Andean mountains make for some pretty stellar views of the night sky. For an even better vantage point of the Milky Way, which is nearly straight overhead here, make a trip out to one of the floating islands where light pollution is virtually non-existent and the skies are crystal clear. Visitors say this vantage point almost makes the Milky Way seem like a volcano erupting from the night sky. 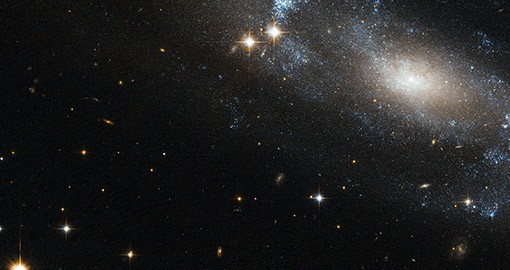 Stargazing is something of a nightly tradition for the locals, who gather at one of several island watering holes each evening to watch the sunset and skywatch, on this remote Belizean outpost. A 30-minute boat ride from the more densely populated Ambergris Caye, Caye Caulker is an artist enclave and haven for ex pats seeking an authentic Caribbean lifestyle. Head to the north side of the small island to laze in a hammock or lie on the beach to see the stars with the sound of breaks on the reef in the background or head out to the reef itself for some night snorkeling and stargazing. There’s really no other experience like it on Earth. 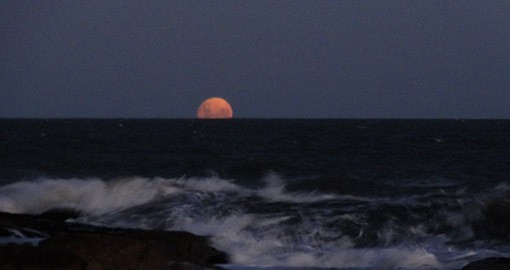 By day, this formerly sleepy fishing village attracts locals with its untamed shoreline and uninterrupted swells just perfect for surfing. In the evening, this laid back spot on Uruguay’s eastern coast becomes an ideal locale for stargazing with its non-existent light pollution. Relaxed and unassuming, it isn’t well known amongst the skywatching community, but those who have made the trip say it’s one of the most tranquil vantage points in the world. For a once in a lifetime experience, try catching the stars during a nighttime horseback ride down the beach. 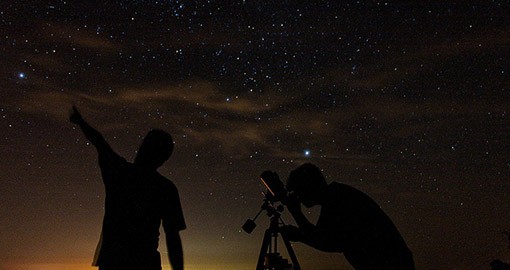 Monte Verde is Brazil’s second highest city at more than 5,000 feet above sea level. Nestled in the Mantiqueira Mountains, this winter alpine-esque mountain village is affectionately known as the Brazilian Switzerland. It’s not far south of the equator and relatively accessible from major cities like Rio de Janeiro and Sao Paulo. For stargazers, its well worth the trip, as the skywatching is so good Accuweather has a stargazing forecast for the area.

If you’d like to wish upon a star in Latin America, call us today to begin planning your astro tour!