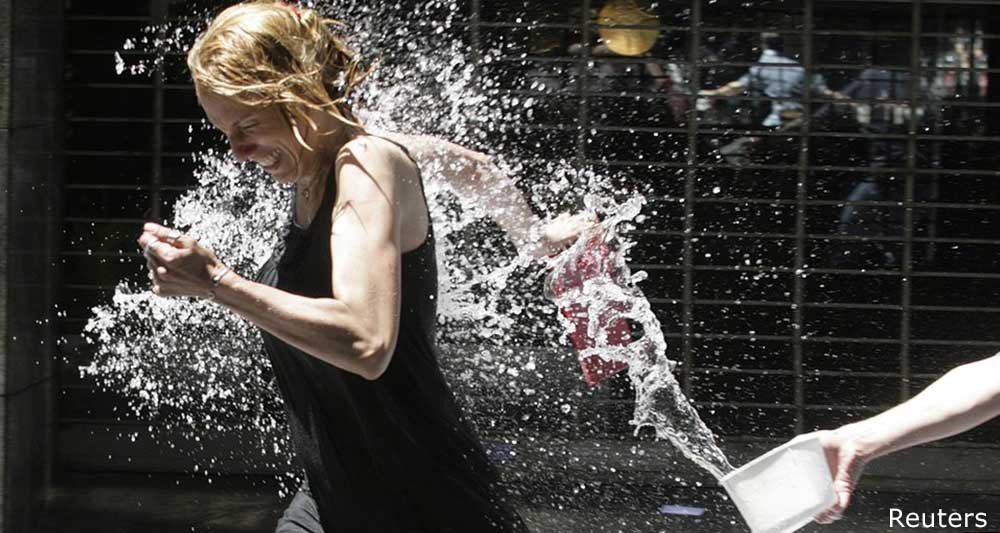 Another popular blog post from winter 2015, our post on the best New Year’s Eve celebrations in Latin America was just begging for a throwback!

Outside of Carnival, there are no bigger celebrations in all of Latin America than those that take place to ring in the New Year. Traditions are wild, colorful and, in many cases, hold great significance for revelers, so a trip to Central or South America for New Year’s Eve brings not only a raucous good time but also a peek into other cultures.

In many places, the party doesn’t even start until the wee hours and won’t wind to a close until after day break, so wear sensible shoes, grab a nap if you need to and then head out on the town to ring in the New Year.

From Costa Rica, down to Argentina and everywhere in between, here are some of our most favorite spots to say goodbye to the old and usher in the new: 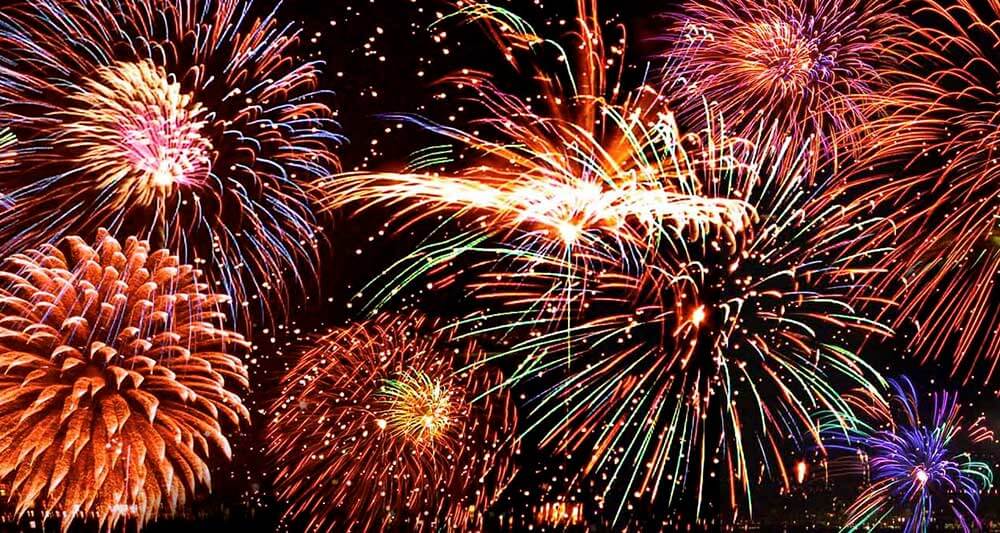 The Argentinian capital is world renowned for its year-round festive vibe and ability to get the party started just about anywhere at any time, but New Year’s Eve in Buenos Aires is a lower key, more relaxed affair. Partially due to the timing (many locals head to glitzy Punta del Este or party central Cartagena for summer break around this time), BA is quieter than normal but still a great place to celebrate NYE. Spend midnight with loved ones over a special themed dinner at a hotel eatery or closed door restaurant and then out to party in the Palermo club district around 1am. Fireworks happen around the Planetario, so you won’t have far to go to hit the bustling nightclubs. 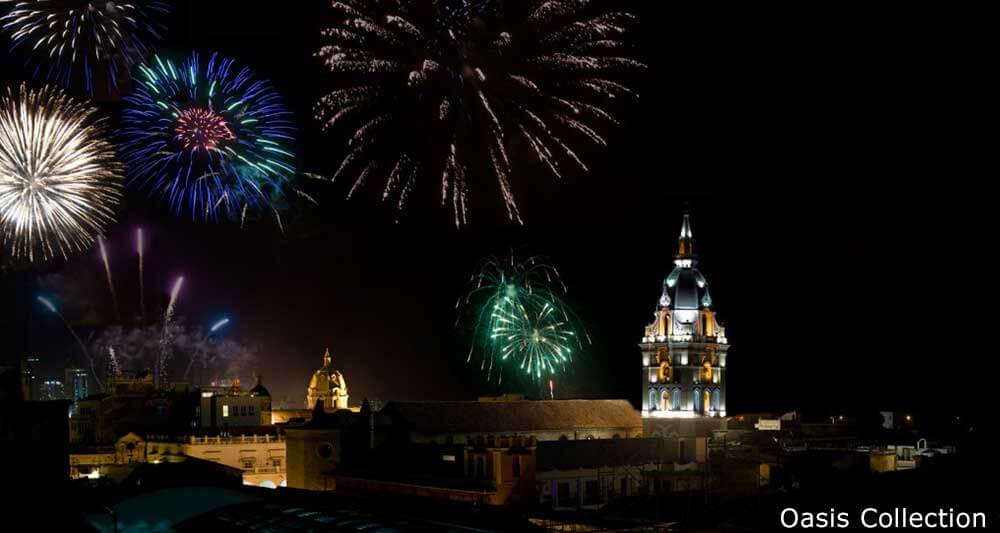 There is no question Carthaginians love a party, which is probably why thus vibrant sea port is often referred to as South America’s party city. These days, Colombia also one of the hottest and fastest growing tourist destinations in the region, and NYE is the perfect time to give it a whirl. Fireworks take place near Cafe del Mar, and they’re so close you almost feel like you could reach out and touch them. The Old City streets are closed to cars and revelers spill into the streets, where they basically drink and dance to live music around every corner until morning. There also are major parties in the city that come with hefty prices tags (think up to $300USD a head), but why would you want to pay to play when you can mingle with the masses in the famed Walled City?! 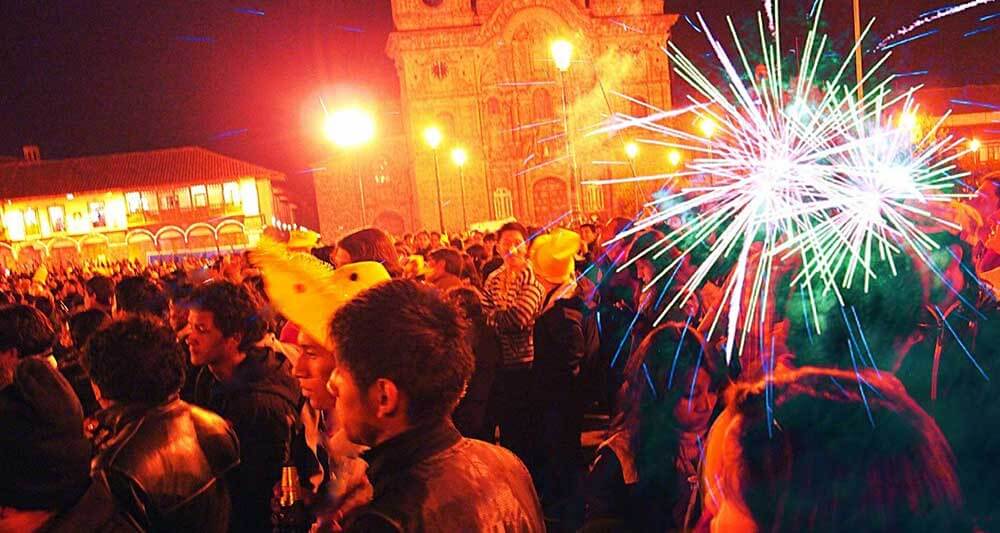 You may think Lima is the place to ring in the New Year when in Peru, but Cusco actually is the most popular place to celebrate in this scenic and magical country. Cusco is the former capital of the grand Inca empire, and you’ll find an almost chaotic atmosphere mostly centered around the Plaza de Arms. Get there early to stake your claim and then check out the flood of locals in yellow who run there are midnight with superstitious tokens and suitcases to bring good luck. You’ll find live music, food vendors, fireworks and, of course, plenty of drinking. Just be mindful that Peruvians are a bit flippant with the fireworks and often shoot them at one another (and maybe at you). Be prepared to stop, drop and roll.

Ah, Montevideo. Uruguay’s capital, main sea port, largest city and home to some of the most wet and wild NYE celebrations in South America. It all begins fairly early with the shredding of last year’s calendar. Just about the time you begin to see the tiny remnants of this tradition littering the streets, you’ll want to begin watching out for flying liquids, as one of the favorite ways to celebrate a new year in Uruguay is by throwing beer and water on each other and pretty much anyone near by. Port Market is the epicenter of this tradition, but it happens throughout the city. So, maybe put your iPhone in a plastic bag. Fireworks happen out at the beach and most people hang out to watch the sunrise over the harbor. Side note: With the exception of NYE, Montevideo is very quiet this time of year. 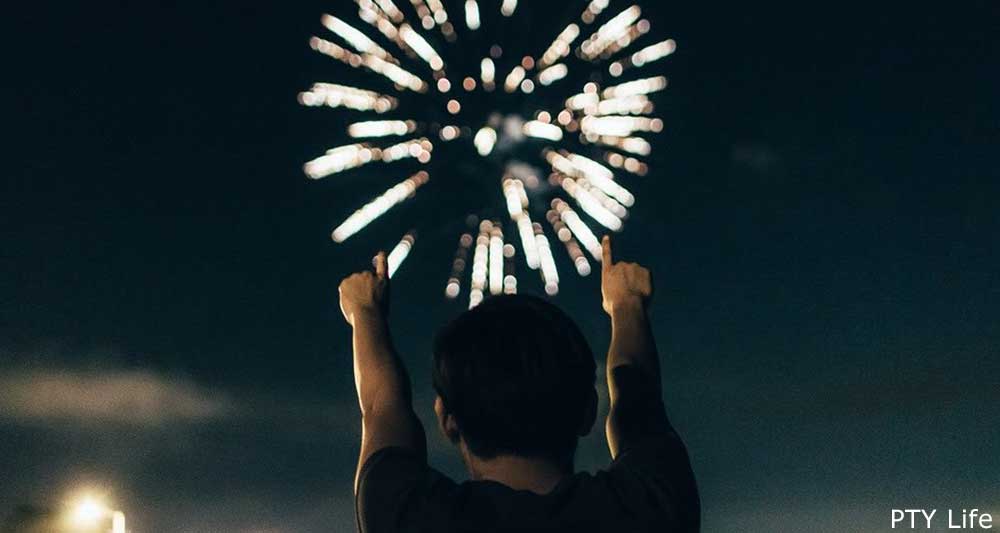 From the epic Caribbean-style parties of Bocas del Toro to the more laid back, family friendly revelry of Boquete, there really isn’t a bad spot to ring in the New Year in Panama. Still, it’s uber modern and chic Panama City that takes our top spot for a real throw down in this intriguing Latin American destination. Panamanians typically celebrate with their families until midnight (so don’t be discouraged if it’s a bit quiet until then) and then fill the streets for some of the most spectacular fireworks displays anywhere in the world– pretty much nonstop until sun up. Drinking all night is a tradition in Panama, where fires burn to ward off evil spirits and seeing the sun is a rite of passage. You’re in for the long haul here friends. 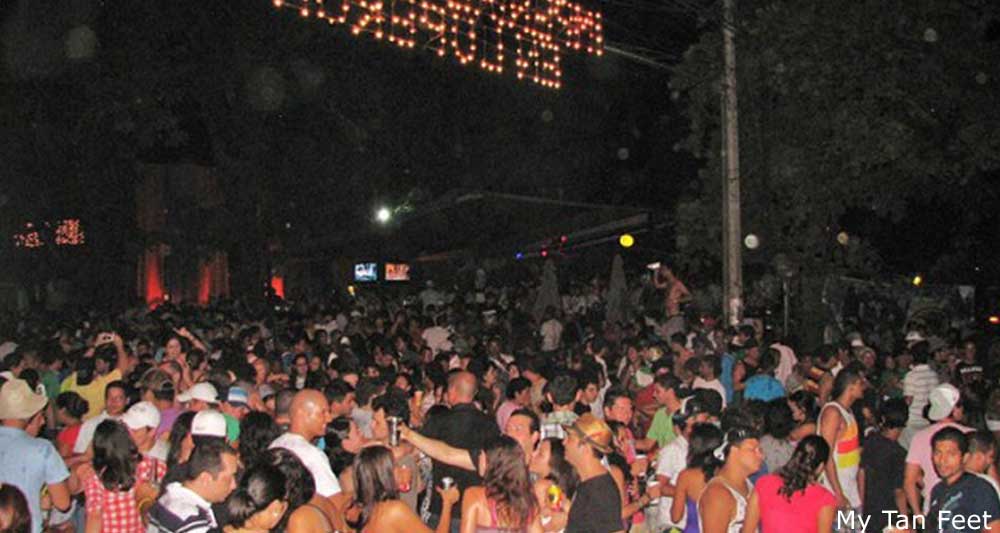 According to Ticos, this is the one party to end them all, where locals tell visiting friends you have to see it to believe it and everyone should experience it at least once in their lives. It’s a total street party in Guanacaste that crams thousands of all-night partiers into one tiny street that runs all the way out to the beach. Locals park their cars and block the road, bars crank up the tunes, street vendors peddle their wares and the party vibe is totally serious and bordering on insane. Traditions to look out for in Playas del Coco, Costa Rica include walking around with a suitcase (like in Peru), sending paper lanterns into the night sky after a late evening meal of pork, throwing coins in houses and washing your front door after midnight. 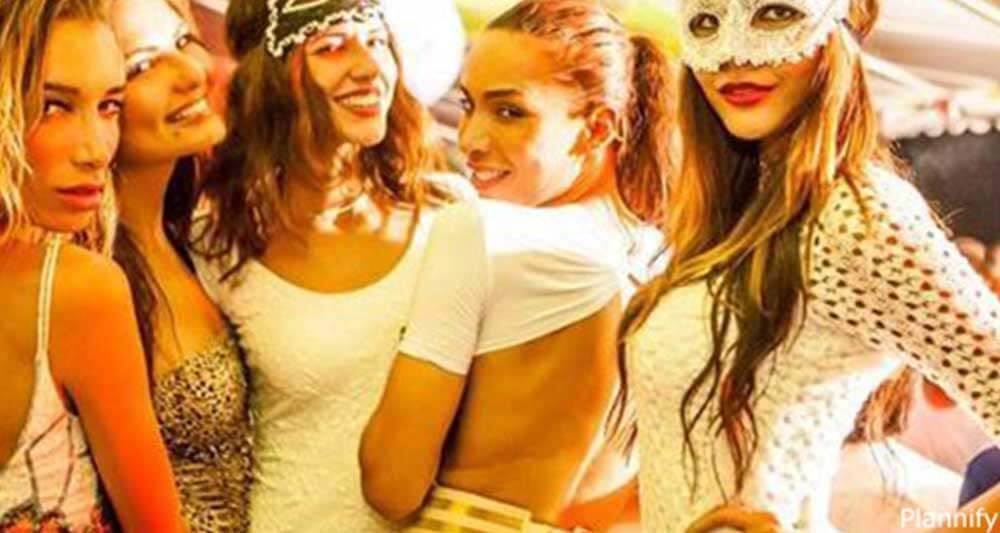 New Year’s Eve is the epicenter of this glitzy seaside hamlet’s very jet set high season, where the general rule is beach-sleep-party until you can take no more. New York Magazine says Punta del Este, “vies with Rio for the sexiest seaside playground in South America,” and you can rest assured NYE is the absolute biggest party of the season in Uruguay. Grab a traditional BBQ dinner and then make nice with the locals to get access to super swanky exclusive parties at beachfront mansions a la Saint Tropez. Once you’re done rubbing elbows with millionaires, models and the rest of the glitterati, head out to the beach to catch the spectacular sunset because, let’s face it, you won’t have been to sleep yet anyway. 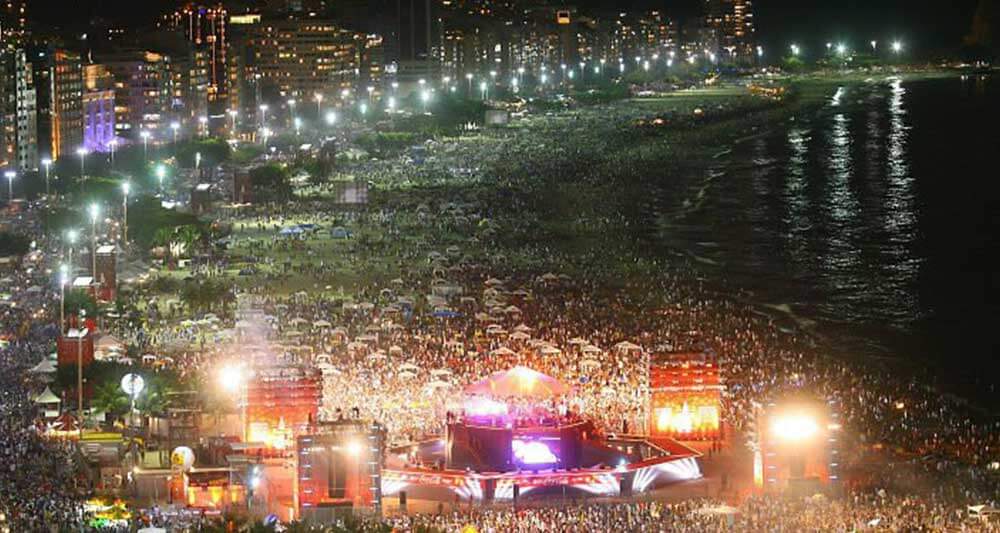 They say Rio de Janeiro is the top New Year’s Eve vacation destination in all of South America, and it’s easy to see why there’s such a draw to the event locals call Revellion. It’s the middle of summer here and, although the party spills into the streets, the main event is on the famed Copacabana Beach, where more than two million revelers gather for a unique blend of secular and spiritual festivities. In Rio, most locals wear white and add pops of color underneath to attract different kinds of good luck in the coming year. Many throw flowers in the sea or release beautiful floating lanterns as offerings to the goddess of the sea, Lemanja. You’ll also probably see more than a handful of people participating in the tradition of jumping seven waves while making seven wishes (this can be fun once people have really started partying). The show, with spectacular fireworks, live music and more, begins around 8pm and runs until at least 5am. This is the second busiest time of year. Hotels in Brazil are expensive and sell out well in advance so plan ahead. 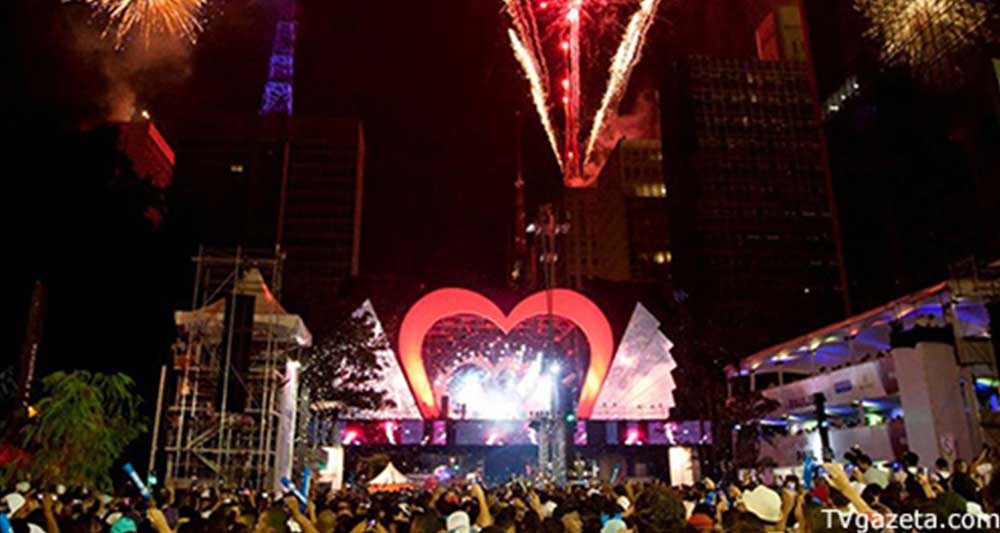 Larger than Rio, Sao Paulo actually is the largest city in all of South America, so it’s not surprising that it also is home to the second largest event in Brazil after Carnival— NYE Revellion. More than two million people flock to see the themed celebration along Avenida Paulista that includes live music and nearly 20 minutes of fireworks. The street is open only to foot traffic, which although crowded makes it a fairly safe place to throw back a couple of cold ones. Keep an eye out for locals eating 12 grapes at midnight (one for each month of the year) while wishing for prosperity and health in the coming year, hopping three times on their right foot with a glass of champagne (try that after a few cold ones) and generally celebrating life with those they love. Like Rio, hotels are expensive and see out fast. Plan early for what is one of the most important holidays of the Brazilian’s year. 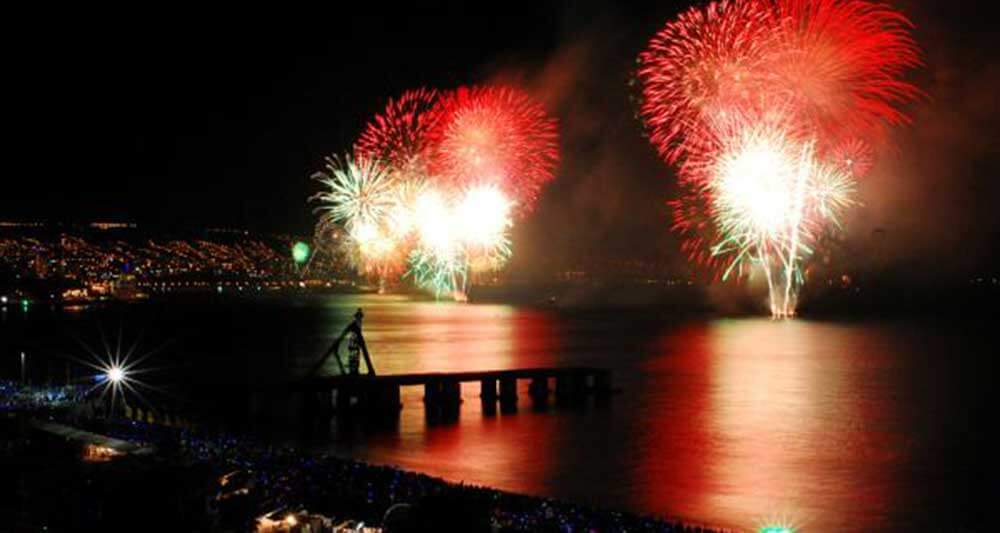 Just under two hours and 70 miles up the coast from Santiago lies Chile’s biggest New Year’s Eve extravaganza. Valparaiso is a UNESCO World Heritage Site also known as the “pearl of the Pacific,” where colorful hillside houses attract visitors year-round. But, more than one million revelers also descend on its streets each December 31 to usher in the new year at late night clubs (think after 1am) after watching the biggest fireworks show in South America (22 minutes shot off from countless boats lining the coast). Although Renaca Beach has the young, hip crowd and Vina del Mar gets appropriately crazy, the pier at Valparaiso is where the main party happens. It doesn’t wind down until about 8am, when the city looks a bit like an abandoned post-apocalyptic ruin. Many a traveler has lost their valuables and their dignity here, so beware.

There’s no time like the present to start planning your New Year’s Eve trip of a lifetime. You’ll never forget the cultural customs, enthusiastic revelry and festive ambiance that ignites across Latin America this time of year. Contact us today to schedule your journey.