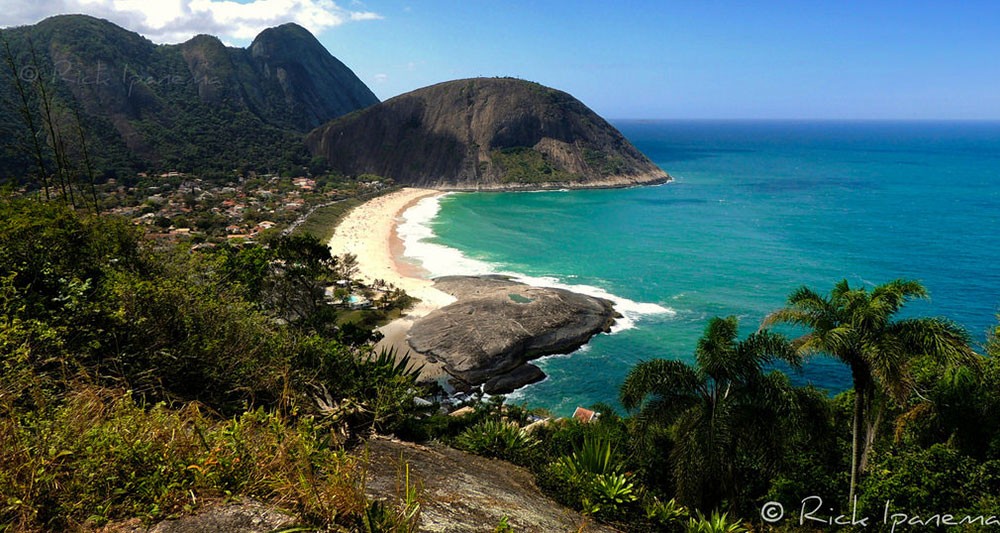 On the heels of #Rio2016 with all eyes on the famed Copacabana and Ipanema, Brazil beaches, it’s not surprising Americans are showing renewed interest in traveling to South America. There’s never been a better time to visit the birthplace of people so famous they need only one name (think footballer Pelé and supermodel Gisele) since tourist visas are waived for U.S. travelers through September 18, 2016.

Whether you choose to plan a last minute getaway to take advantage of relaxed entry requirements or have a bit more lead time, Brazil (with its nearly 5,000 miles of Atlantic coastline) is a beach bum’s nirvana. But, where do locals (famous or not) like to relax and catch some rays when it’s time for a seaside vacation?

Just across the bay from Rio and under an hour from its twin city of Niteroi, you’ll find a relaxed beach town vibe with vibrant blue water, fine golden sands and amazing views of Brazil’s capital city (especially at night). Itacoa, as the locals call it, is nestled between two mountains standing sentinel over consistent three to six-foot swells that make this beach something of a mecca for the international surfing set.

En route to Itacoa Beach, you’ll pass over a more than 8-mile-long bridge and alongside the famed MAC Museum before arriving at this pristine stretch of coastline that is all but abandoned on weekdays and filled to the brim with beautiful locals on weekends. Itacoa is one of the few Brazil beaches in this part of the country and this close to the urban centers that is environmentally protected, so don’t be swayed by the closer shores of the bay along the way, as some suffer from pollution. Head, instead, to the open waters of the Atlantic and Itacoa. If the waters are a bit too choppy, look to the end of the beach, where rocky outcroppings mean calmer waters prevail.

VIP Tip: Getting hungry? Fishermen will love taking their fresh catch to the second floor of the nearby fish market where some local restauranteurs will cook your haul for a fee. Everyone else should find the longest line at the beachfront kiosks to grab an affordable and tasty seaside snack the locals love.

It seems an impossible task to choose the best stretch of coastline from among Fernando de Noronha’s at least 16 secluded Brazil beaches, but locals say Baia dos Porcos is the most breathtaking. A one-time pirate hideout, prison camp and even, remarkably, United States Army Base, the remote island of Fernando de Noronha, today, is an environmentally-protected oasis where only a little more than 400 tourists are allowed each day.

The surrounding waters are a crystalline national marine park boasting average visibility of 50 meters and simply teeming with aquatic life, making this Bohemian island a SCUBA diver’s delight. Not certified? That’s okay, grab your mask and snorkel and wade in just off Baia dos Porcos for some highly biodiverse South Atlantic reef life. They say even the sharks are friendly on Fernando de Noronha, so you won’t want to spend all your time on the 7-mile wide isle at just one beach. Other local favorite Brazil beaches include Bode, Cacimba do Padre and Baia dos Golfinhos where you can see dolphins mating in the wild.

VIP Tip: Because the archipelago of the same name is a UNESCO World Heritage Site, you’ll find precious few hotels here. The private homes, called pousadas, are your best bet for ultimate relaxation and rubbing elbows with the gregarious locals.

Despite a somewhat recent onslaught of international tourism and a reputation as the North’s hippest beach town, Praia da Pipa near Natal miraculously has retained its super laid-back coastal vibe long-beloved by Brazilians and foreign surfers (who first found the sleepy fishing village in the 1970s) alike. Its name translates to Kite Beach, so it should come as no surprise there are year-round winds that whistle across the high cliffs, fine sands and crystal clear waters. Fortunately, there also is year-round tropical sunshine, making Pipa the ideal destination for water sport enthusiasts.

In town, you’ll find a widely varied array of restaurants, shops and nightlife owned by tourists who came for a visit and just never left. Like many of Brazil’s best beaches, Pipa is environmentally-protected, so the area is brimming with plenty of flora and fauna to captivate eco-lovers. Take a tour amongst the green lagoons, sweeping dunes and mangrove forests for another side to one of Brazil’s most beautiful beaches.

VIP Tip: Although Pipa is known as a surfer’s paradise, its crystal clear waters are filled with turtles and dolphins, so don’t forget your mask and snorkel!

If that quintessential nomadic traveler vibe is what you’re after, Praia do Forte on Boipeda Island is a remote dreamscape in the Tinhare archipelago. Just about an hour charter flight from Salvador, Boipeda Island has no roads, no cars and no strangers, but it is where Brazilians go when they have a long holiday weekend to kill.

The island, situated between the Atlantic Ocean and the Inferno River Estuary, features more than 600 miles of Bahia coastline, so there is no shortage of sprawling white sand beaches, tidal pools and dreamy lagoons. But you’ll also find marshes, mangroves and much more dotted amongst the four tiny villages on the island, creating amazingly diverse ecosystems. Locals get around by fast boat, and we recommend grabbing some friends, hiring a driver and touring the waters before spending a few hours swimming in the glasslike waters of Ponta dos Catelhanos, which is something of a tradition in these parts. It may not be easy to get here, but this gem of Brazil beaches sure is worth it!

VIP Tip: Ask about the bioluminescent plankton found off the island’s shores and don’t miss the sea turtle conservation center.

On the northeast coast of Brazil, lies a tropical paradise with rich culture, Hawaiian trade winds and more than 300 days of sunshine annually. Here, in the department of Ceara, there is an abundance of paradisiacal shoreline that locals definitely do not take for granted, but there’s only one beach known as “the pearl of the east coast.” Although you’ve probably heard of the wind-surfing mecca Jericoacoara Beach, which is lovely, we prefer the chilled out ambiance and huge pink sand dunes of neighboring Canoa Quebrada.

A small group of foreign hippies landed here on the Rising Sun Coast decades ago and created a haven of tranquility. You can still feel these effects today on this reef-protected bay and small-town beach that time seems to have forgot. Canoa is famous as much for its spectacular natural beauty as for its nightlife that though wild still manages to feel quite amiable and quaint. Only about 3,000 locals live here year-round, and the area is protected by an environmental zone, so get out and explore when you’re done sunbathing and snorkeling at the beach.

VIP Tip: A good way to get the lay of the land, and make some new friends, is to attend the regular beachfront luaus. Don’t miss hiring a ride with a local native fisherman on his jangada.

If you’re ready to pack your swimsuit and flip flops and head south to one of these Brazil beaches locals love, contact us today to begin planning your Brazil beach vacation.