On our Remote Brazil Honeymoon, the African influence can be felt by all five senses, as you explore Bahia, Salvador and off the grid Itacare.

On our Remote Brazil Honeymoon, the African influence can be felt by all five senses.

Learn traditional rhythms, dance, religion and cuisine. The Convento do Carmo and the Txai Resort is splended! Anyone visiting Salvador will immediately discover why the state is called “the land of happiness”. Fringed by beaches, vast coconut plantations, majestic mountain ranges, Salvadors local exuberance is expressed in an unbelievably rich folklore, which includes capoeira, candomble and samba-reggae. We depart the city and take a short flight to Ilheus, and you’re on your way to Itacaré a place that was “off the grid” for many years because of its relative isolation. Itacaré is a refuge for nature lovers, surfers and free-spirits who hunger for a taste of the real Bahia, essentially, people just like you! Glimpses of a quieter past are apparent on Itacaré’s quaintly cobbled streets and in its charming old houses. But you won’t be staying in the town, no. You’re on your way to an earthly paradise just down the road, known as the Txai (pronounced CHEYE). Get ready to “bliss-out”! A perfect honeymoon for couples looking for culture and paradise in the same itinerary.

Once you arrive in Salvador da Bahia, a private driver will take you to your hotel to check in. Today, you can explore the city.

Your private guide will take you on an exciting African Oriented City Tour.

Today, you will take a cruise to two of the 36 islands in the enchanting bay of All Saints. After dinner, you can experience the magnificent Carnival Groups practice.

You will go on a tour of the beautiful countryside of Brazil. Later in the day, you can take a walking tour of the town of Cachoeira.

Sadly, today you leave the city of Salvador and start the journey to Itacaré. You will be staying at Txai, which is just down the road from Itacaré.

After breakfast, your private guide will show you the stunning beaches in Itacaré.

Today there is an adventure planned to explore Itacaré. This excursion includes paddling in the Tijuipe River, relaxing on the water, and at a Fazenda.

Day eight consist of a morning massage and in the afternoon a thrilling tour on the Rio de Contas.

This day is open at your leisure until you are taken to the airport for your safe return flight home. 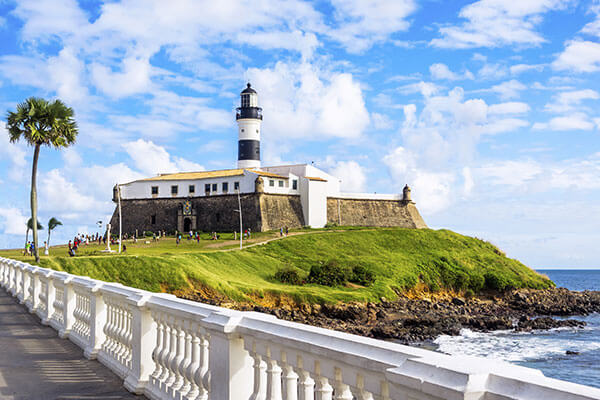 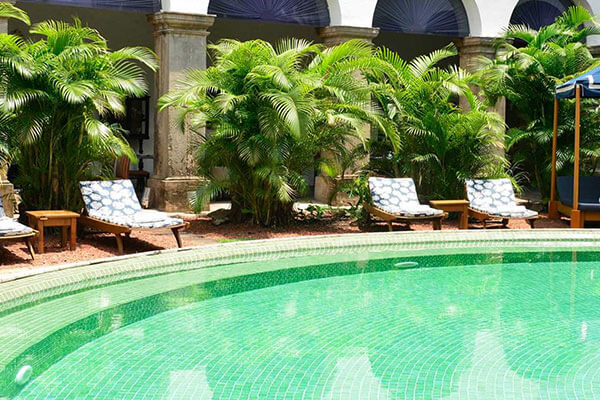 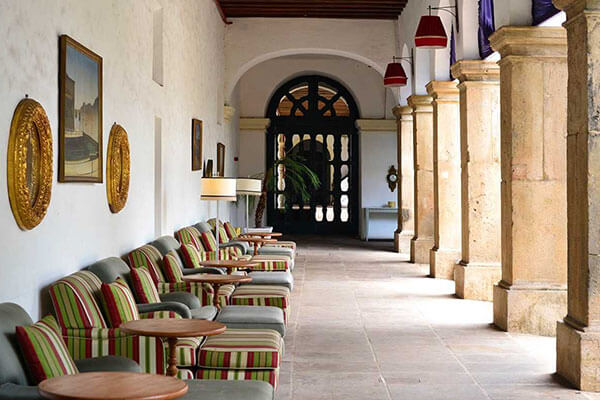 Arrival in the lovely city of Salvador da Bahia! You'll be met at the airport by your private driver who will shuttle you in welcome comfort to your hotel. Check in and relax! Today you'll have an afternoon to walk around the neighborhood and breathe in the exotic aromas of spice and sea spray. You're really here! Tonight you'll begin a journey of the senses through a city that is considered by many to be the “Rome of the Black Diaspora”. Now that you have a “lay of the land”, you'll be met at the hotel by your private guide and driver who will take you to see the best show that Salvador has to offer, next to Carnival that is…the “Bale Folclorico da Bahia”. The internationally renowned, 38-member troupe performs folkloric dances of African origin, which include slave dances, capoeira (a form of martial arts), samba, and dances that celebrate the city's famous Carnival. The troupe is famous for its passionate, frenetic style that captivates audiences and leaves them breathless in the aisles. The company made its debut in July of 1988, and, later that same year was awarded the prize, "Best Performance of the Year" by the Brazilian Ministry of Culture through the National Institute of Dance. Watching all that dancing really works up an appetite, eh? Great, because after the show, you'll be taken out to a traditional Bahian restaurant to sample some of the culinary delights that make Salvador famous.
2

After a delicious breakfast you'll be met at the hotel by your knowledgeable private guide and your trusty driver. Together they'll share with you your first Salvador adventure, an African Oriented City Tour. The tour will begin in the lovely, tree shaded neighborhood of Barra at the mouth of the Bay of All Saints with its famous lighthouse; a proud symbol of the city. From there you'll visit the old historical section of town, an area called the Pelourinho (whipping post). Pelourinho has the largest and best preserved collection of colonial architecture in all the Americas. You'll stroll down the ancient, narrow, streets lined with pastel colored buildings, noble survivors of times long gone. You'll also visit the awe inspiring Sao Francisco Church with its exuberant gold-leafed Baroque interior, an impressive testimony to both faith…and wealth. If you like, your guide can also show you the bustling Mercado Modelo in the lower city, where you can buy expertly made local artifacts. This tour will immerse you in two distinct aspects of Salvador, the new and the old, concentrating on the early expansion of the city and the ever present contributions of it's afro-descendants.
3

After another delectable breakfast of fresh fruits, breads, cheese, of course, great Brazilian coffee, you'll board a majestic schooner and cruise to two of the 36 islands in the sparkling bay of All Saints. Your first stop will be at Frades Island. Here you'll have time to relax in the golden rays of the sun, or swim in the warm crystalline waters. Now its time to re-board the boat for the short crossing to the larger Itaparica Island for a freshly prepared lunch. After eating, more time to relax on the beach or, if you prefer, you can visit the charming colonial town of Itaparica. Time really flies when you're having fun, doesn't it? It's already time to return to Salvador. Crossing the bay you'll be taken by the tremendous views of the city. Do you like music? I mean the kinds of rhythms that make you shake with a pure energy that can only be called joy. Well, if you do, put on your dancing shoes because tonight after a delicious dinner you'll be taken to hear one of Salvador's best Carnival Groups practice. You know, it is said that when Bahians aren't celebrating they're practicing for a celebration. In this magnificent city of scents, sights, and sounds the party never really ends. Tonight you'll experience a little bit of Carnival and understand why no one in Brazil throws a better party than they do right here in Salvador!
4

How about a drive in through the scenic countryside? Today you'll see some of the beautiful countryside you only caught a glimpse of when your plane was landing. Leave the city behind as you drive through some of the oldest farmland in Brazil. Welcome to the land of sugar cane and tobacco plantations, peaceful colonial towns and bustling country markets. You'll visit an experimental cacau plantation and lunch in Cachoeira, a charming colonial town in a fairytale setting on the banks of the Paraguassu River. Later take a walking tour of the town with its many wood sculptors' ateliers and a busy market. You'll visit the Sisterhood of the Boa Morte, a sorority which traces it's origins back to the time of slavery. Cross to the western bank of the slow moving river and visit the Danemann Cultural Center where you'll see world class cigars being expertly rolled. Get ready for a journey back in time to the Brazil of yesteryear.
5

Today you'll leave the city of Salvador behind. You're on your way to Itacaré a place that was “off the grid” for many years because of its relative isolation. Itacaré is a refuge for nature lovers, surfers and free-spirits who hunger for a taste of the real Bahia, essentially, people just like you! Glimpses of a quieter past are apparent on Itacaré's quaintly cobbled streets and in its charming old houses. But you won't be staying in the town, no. You're on your way to an earthly paradise just down the road, known as the Txai (pronounced CHEYE). Get ready to “bliss-out”! The Txai introduced a new type of hotel to Brazil: “barefoot chic”. It was the first, and continues to be the best at what it does. It features dream-perfect bungalows, spread along a deserted coconut strewn beach; each bungalow located a civilized distance from the other. The resort's crystalline Zen-like pool will enchant, as will its three designer-elegant social areas. World-class cuisine is offered in a restaurant built on a natural rise surrounded by breezy palms, with a stunning view of the azure sea. The latest addition to the complex is the Txai Health Spa, a beauty and relaxation spa situated at the highest point of the property (just walking there, and seeing the view, makes you feel at one with the Universe). Even with all that man has wrought here, the real pride of the Txai is still undoubtedly the natural environment that surrounds it. This place seems to have sprung naturally from the flowery fields after an enchanted tropical rain.
6

After your first perfect breakfast at the Txai, you'll be met by your private guide who will show you all the happening beaches in Itacaré, like Tiririca, Resende, Costa and Ribeira. Instead of dunes, the beaches of Itacare' are bordered by hills covered with dense Atlantic Rainforests. To make things even better, for 30 kms south of the city there are nothing but old coconut and cocoa plantations, which protect the coast from being subdivided and developed. Visiting Itacare is an opportunity to see the real Brazil, the simple life that will be yours for at least another few days. Tours not included in this package.
7

The movement of the tides commands you today, because at low tide you'll walk from Itacarzinho Beach, to the mouth of the Tijuipe River where you paddle upstream in canoes about 5 km (3 miles) to a gorgeous natural swimming hole. Enjoy a well-earned bath in the rapids (a natural Jacuzzi), followed by a caipirinha at a real Fazenda (Plantation house). As you sit next to the wood stove looking out over the dreamy coconut groves and mangrove wetlands at the mouth of the river, you won't ever want to go home. Tour not included in this package.
8

Just when you thought things couldn't get any better. Today after breakfast you'll enjoy a perfect massage at the spa. Relax with a view and the mesmerizing sound of the ocean. This massage is done simultaneously with two massage therapists, using essential oils and an enticingly light touch. The effect relieves pain and fatigue, and leaves you completely relaxed and at ease. After a perfect afternoon, you'll cruise aboard a sailing canoe on the Rio de Contas, one of the most important rivers in southern Bahia, which flows from its source in heights of the Chapada Diamantina to the sea at Itacare. Your arrival at the mouth of the river, where it joins the sea will be perfectly timed to enjoy the final sunset of your “tour of the senses” here in Bahia. Of, course a perfectly prepared caipirinha at this moment is “de rigger." Tours not included in this package.
9

Well, all good things eventually must come to an end. After a day at leisure, you will be driven to the airport for your flight home. Time to dream about your next trip with VIP Journeys! 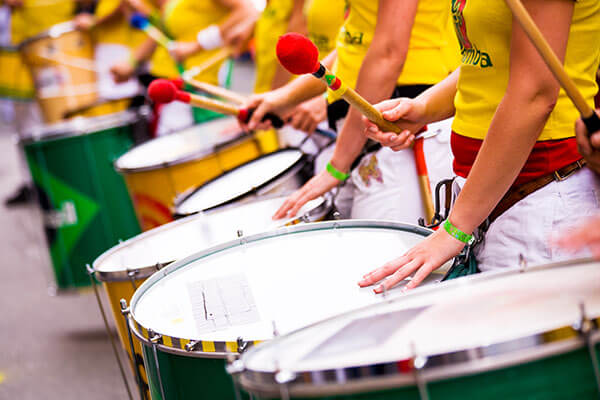 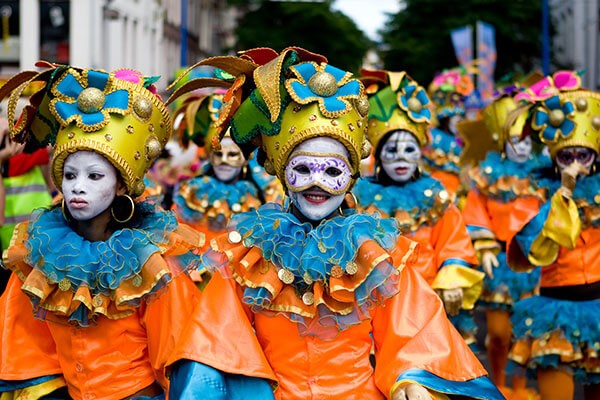 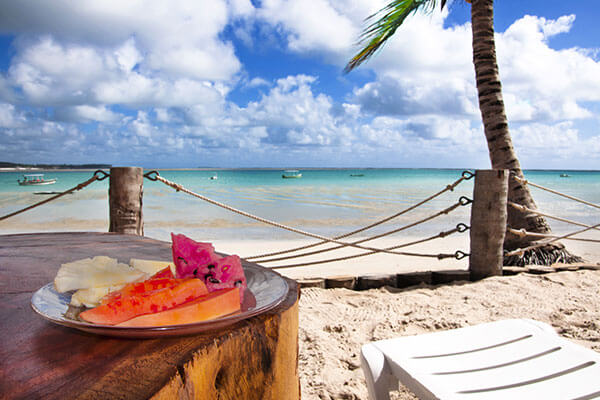 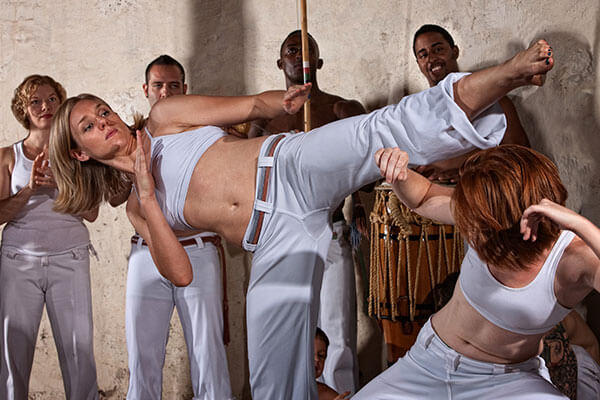 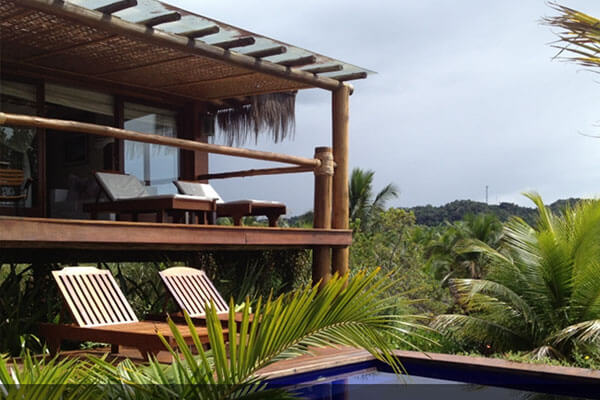 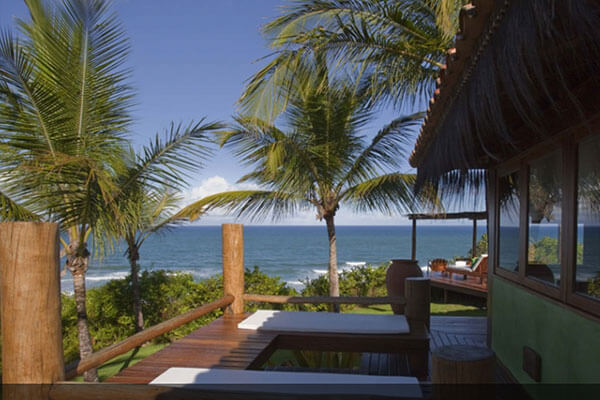 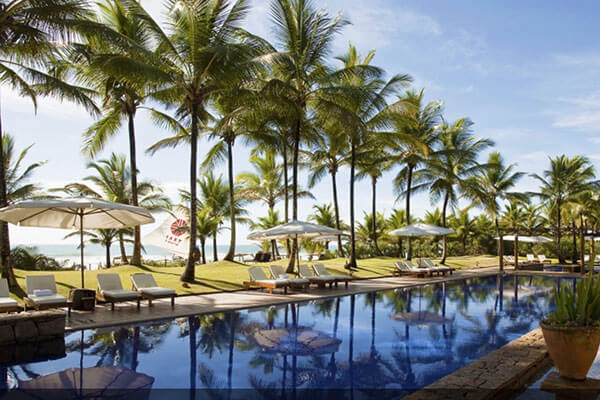 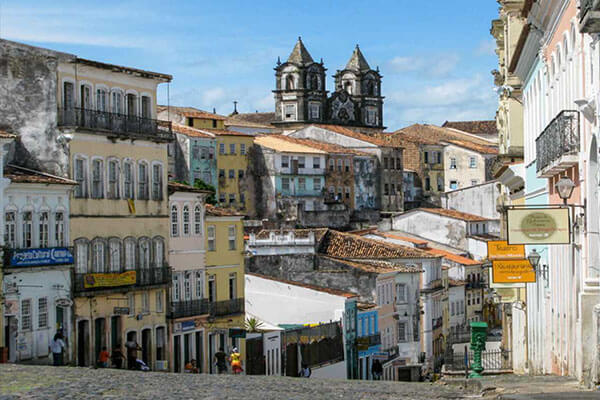 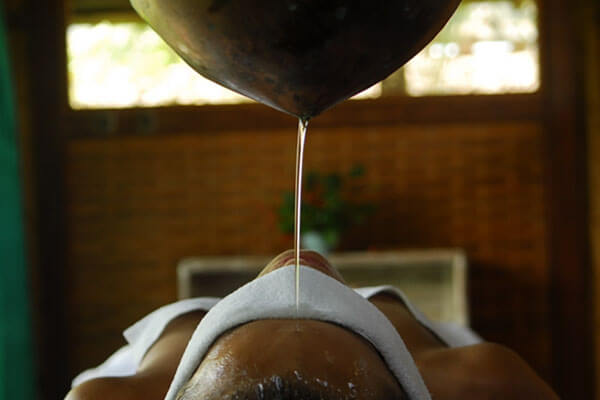