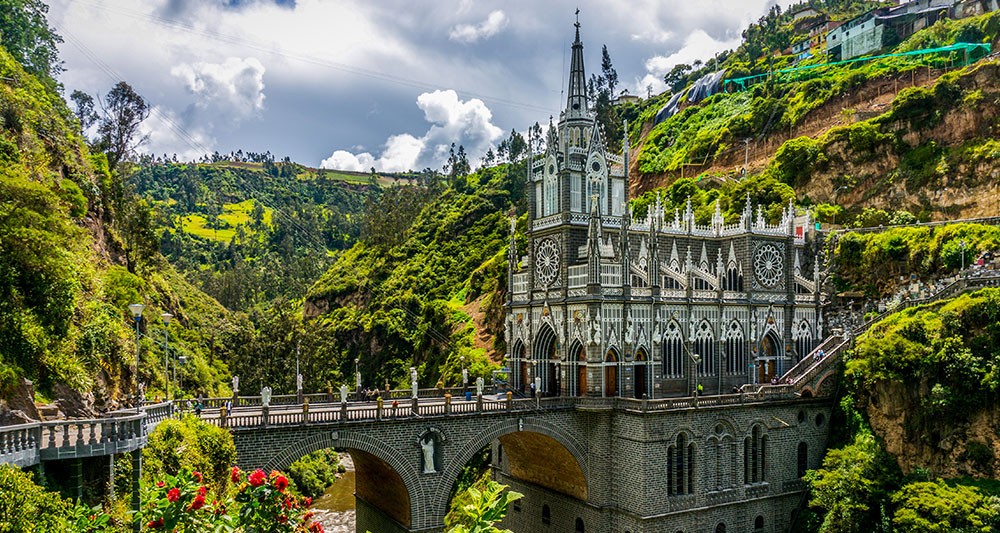 Cultural tourism has become one of the travel industry’s most quickly developing segments, leading the industry in growth. According to recent studies, most travelers extend their stay in a destination based largely on the availability of cultural activities, and a full one-third of U.S. travelers say that specific heritage, arts and cultural events influence their choice of vacation destination.

In Europe, and especially in destinations like Rome, religious tourism plays a major component to cultural tourism, but you don’t have to travel specifically for religious reasons to appreciate the massive amounts of cultural artifacts housed in traditional places of worship. Often repositories for art, intellectualism and untold national treasures, the buildings themselves also are architectural masterpieces and living monuments to the lifeblood of a given destination.

Moreover, each church or cathedral has its own unique character and wonders waiting to be unlocked by the curious visitor. Tourists have been traveling to cathedrals for centuries, but Central and South America often are overlooked by this growing market. Not surprisingly, Latin America is home to some truly breathtaking cathedrals that house cultural iconography and mysteries all their own.

Here are our Top 10 cathedrals and churches in Latin America: 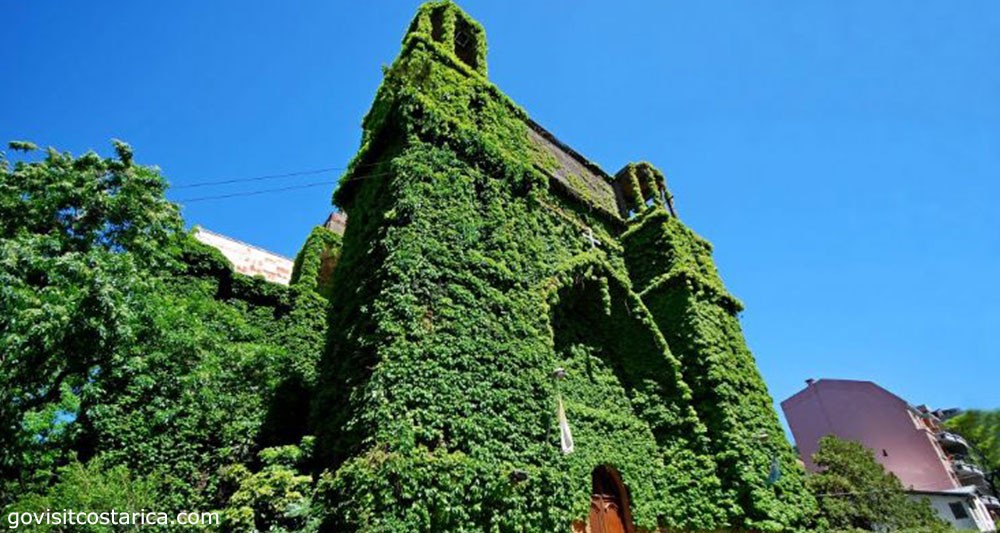 Shrouded in secrets, the Green Church or Garden of Olives parish church is located in the Buenos Aires, Argentina suburb of Olivos. Little is known or written about this ivy-covered abbey, but anyone who happens upon it is simply spellbound by its organic beauty. It was established in 1897 but not completed until the 1930s, making it one of the more modern of our Top 10. Its relative modernity and lack of information surrounding it make it not to be missed. 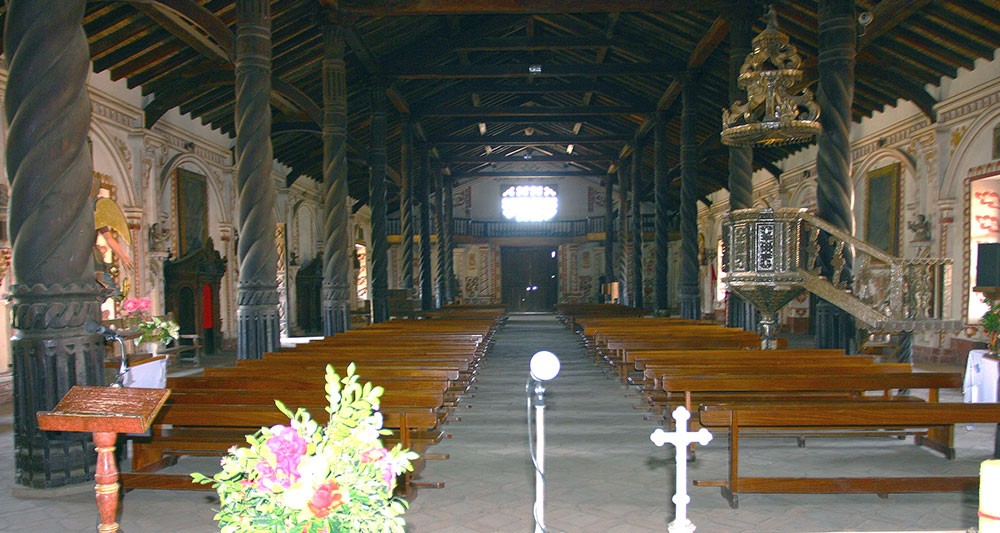 Located in a larger Jesuit mission compound, San Rafael de Velasco Church in Santa Cruz, Bolivia boasts a unique blend of European and indigenous influences. The larger complex, founded to convert tribal natives to Christianity and called Chiquitos, is a designated UNESCO World Heritage Site housing lovely original paintings and woodwork. This particular church was established in 1696 but not constructed until almost a century later. Its ceiling is made from reeds, and its magnificent pulpit is covered in mica. 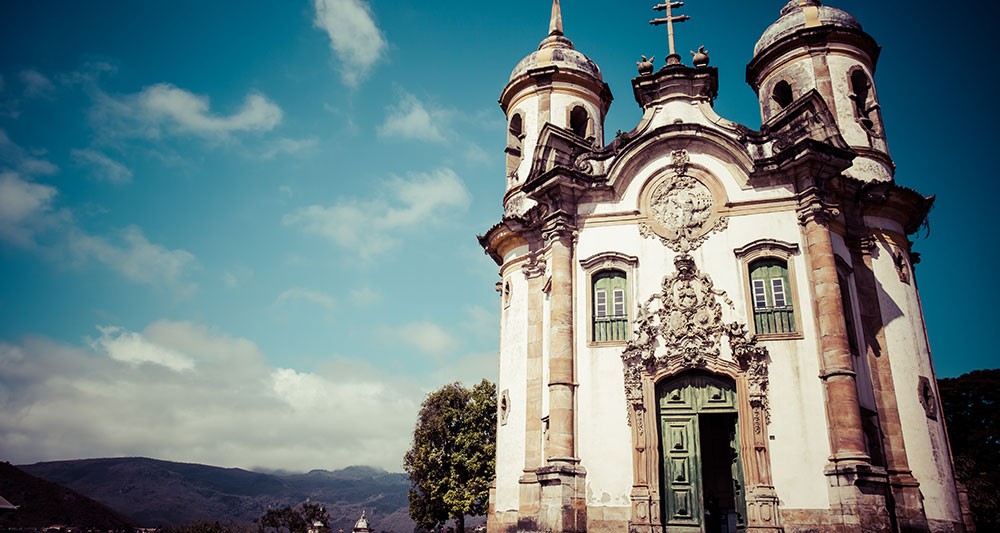 Often referred to as Brazil’s “most important piece of Colonial art,” São Francisco de Assis is a Rococo Catholic cathedral close to Ouro Preto, Brazil’s main square. Construction begin in 1766 and was led by the renowned Brazilian sculptor and architect Antonio Francisco Lisboa (aka Aleijadinho). He not only oversaw the design and construction of this grand baroque-style cathedral but carved the entirety of the exterior himself. Inside, you’ll find a small museum, more carved decor, gold woodwork and a painted ceiling by artist Manuel da Costa Ataide. 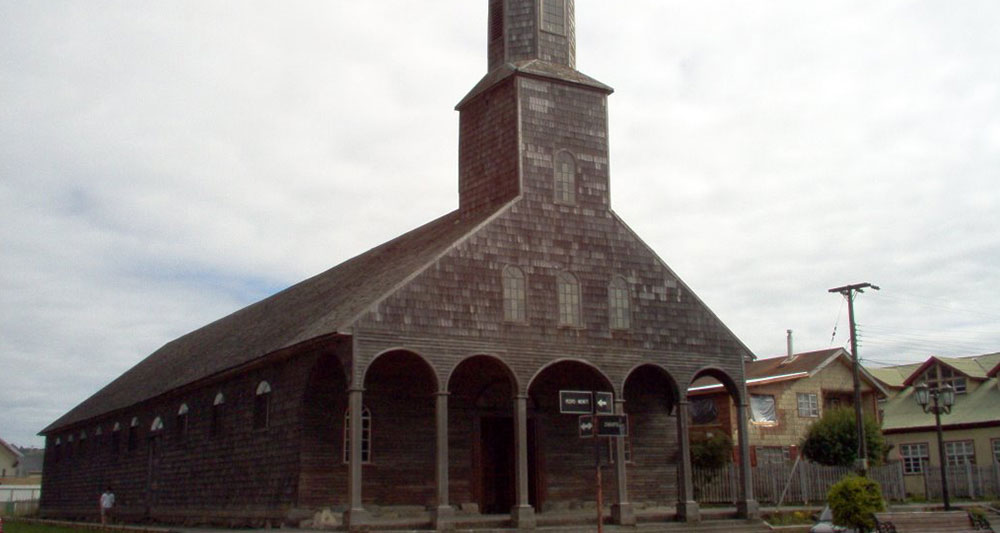 Built around 1740 in Chile’s Chiloe archipelago on the island of Quinchao is the Roman Catholic Santa María de Loreto or Church of Achao. The building, the oldest wooden church in the country and one of only a few left in the Americas, is almost entirely intact and sits on the main plaza as a Chilean national monument. It is part of a UNESCO World Heritage Site of numerous iconic wooden churches with idiosyncratic wooden arches. Visit during the summer months to catch the wonderful Chiloe Folklore Festival and experience the largest cultural celebration in the region.

Colombia’s Santuario de Las Lajas boasts not only grandiose architecture but an awe-inspiring locale and even its own miracle. Built in the Guaitara River canyon, this gothic revival Roman Catholic basilica was named for the flat sedimentary rock found in the area. Although the present structure was built beginning in 1916, the original straw and wooden church was constructed in 1756 for a miraculous event that took place two years prior. A woman and her deaf-mute daughter sought refuge from a storm between two huge lajas when the daughter claimed the Virgin Mary was calling to her. Many make pilgrimages here to see the image of Mary on the stone and pray for healing. 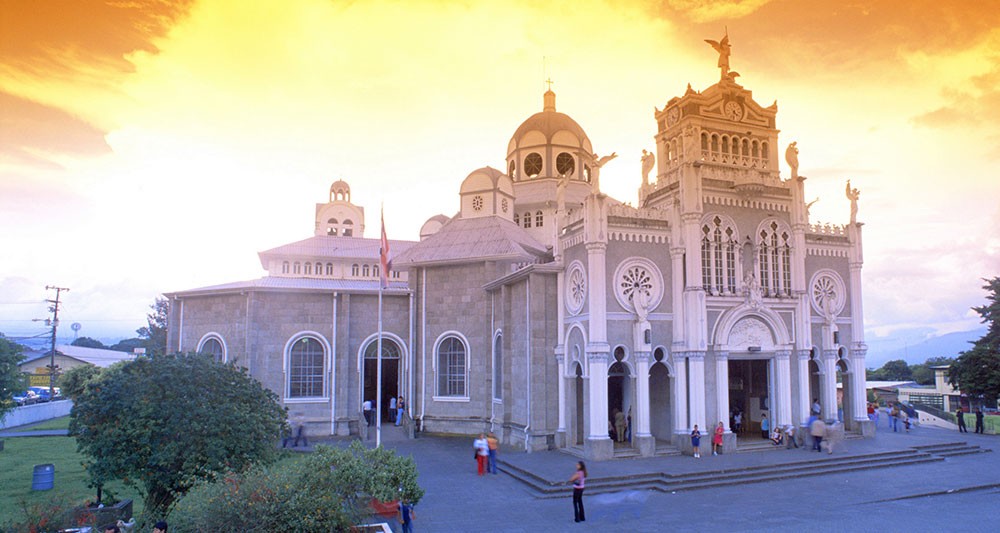 Another basilica shrouded in legend, Costa Rica’s Basilica de Nuestra Señora de Los Angeles in Cartago was built in 1639 after a little girl found a small statue of the Virgin Mary and took it home. The next day, the statue was back where she found it, so she took it to the local priest who locked it away. The day after, the statue was right back where it was found by the girl. For many years thereafter, the church was destroyed by earthquakes so many times that it eventually was moved to a new site. Today, more than two million pilgrims visit each August to see the statue (and this stunning example of Colonial architecture) and visit the official patron of Costa Rica.

Basilica of the National Vow | Ecuador 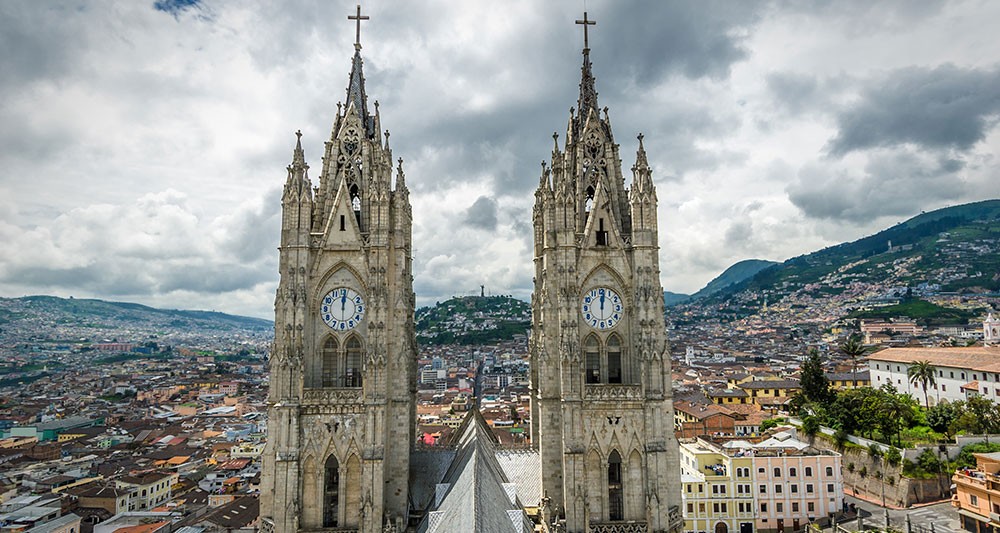 Quito, Ecuador’s Basilica of the National Vow is the largest Neo Gothic cathedral in the New World with a basilica towering over the city at 460 feet tall. Construction began in 1884 as a permanent reminder of the country’s consecration to the Roman Catholic devotion of the Sacred Heart, but the first stone wasn’t actually placed until almost a decade later. Officials tried numerous sources to fund the build— one of which was for donors to purchase stones with their names carved on them. We love to look for these around the building. The basilica still is technically unfinished, and local legend says that when it is complete, the end of days will be upon us. In addition to the carved name stones, look for the Ecuadorian-inspired gargoyles guarding this place of worship. 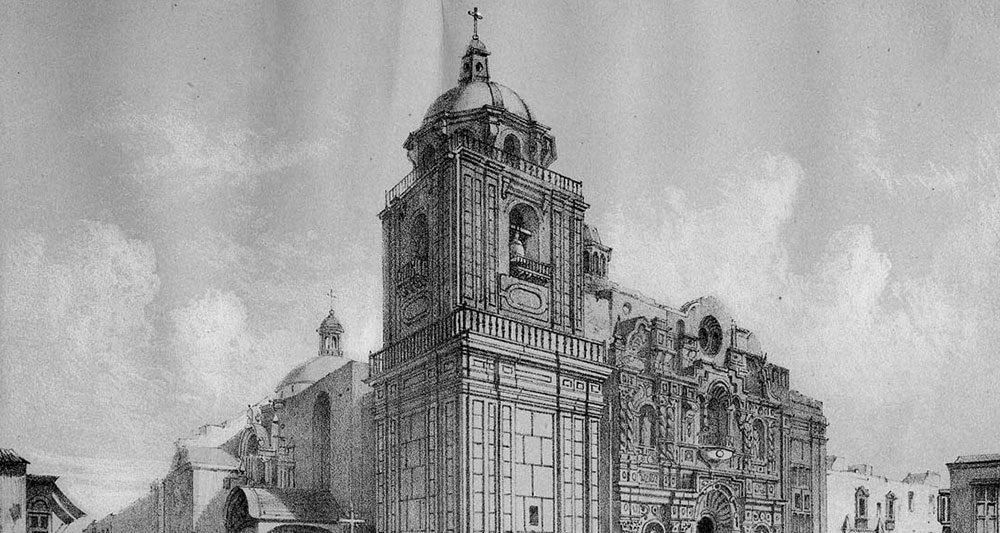 No trip to Lima’s historic city center is complete without a visit to the Our Lady of Mercy basilica and convent. Originally constructed in 1535 and dedicated to Peru’s armed forces, the baroque-style building that stands today actually dates to roughly 1650 after the first was destroyed by an earthquake (the original foundations are still there). La Merced is a true artistic treasure, housing abundant gold and precious stones, including a siren-shaped pearl said to the second largest in the world. There is a cloister in the building that doubles as a museum. Keep an eye out for information on the Mercedarians who came to convert the native Peruvians to Catholicism— this sect is thought to be one of the oldest in the world, dating to at least 1223. 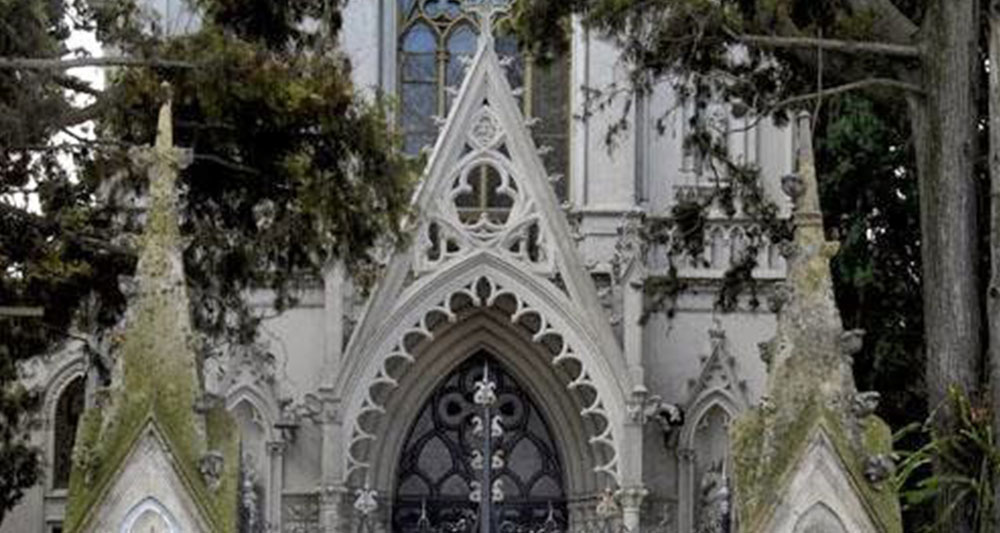 Another lesser known of our Top 10 favorite cathedrals and churches in Latin America (at least outside of its home country) is La Sagrada Familia or Capilla Jackson parish church in Montevideo, Uruguay. You won’t find much written on it in English, but this Roman Catholic church originally was designed and constructed by a French architect in the Neo Gothic style as a private chapel. It was consecrated in 1870, and today this national monument is used as a parish church for Jesuits. 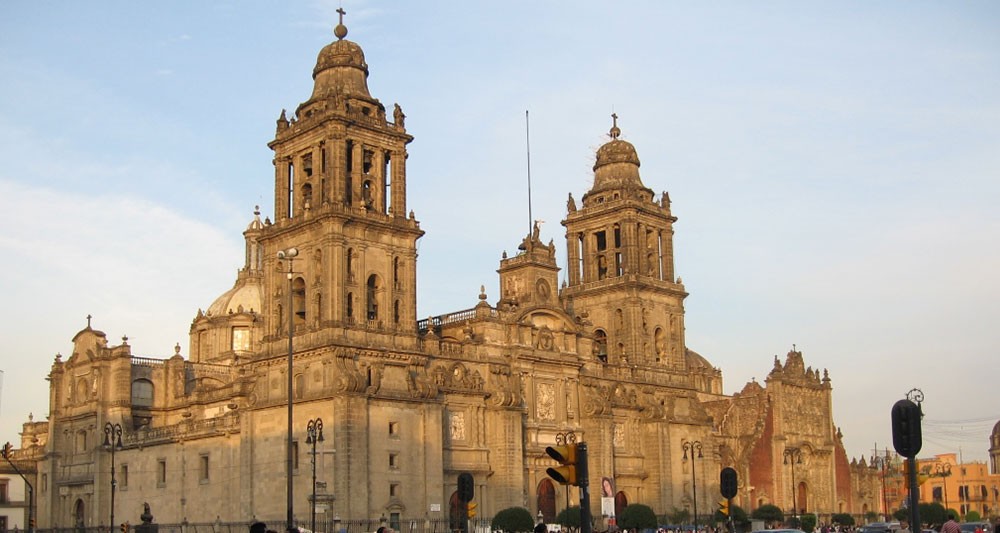 The oldest and biggest (think 16 chapels alone) in the Americas, an honorable mention for our Top 10 favorite Latin American cathedrals has to go to Mexico City’s Metropolitan Cathedral of the Assumption of the Most Blessed Virgin Mary into Heaven. This Roman Catholic cathedral located at the historic city center and built over a former Aztec sacred temple, also is the seat of the Archdiocese of Mexico. It was built in sections beginning in 1573 and spanning nearly near two centuries. Today, it is home to two of the largest 18th century organs in the Americas and plays host to a wealth or artistic treasures. Although it has been damaged by fires and floods several times, the building has been restored but still lands on the World Monument’s Fund 100 Most Endangered Sites.

If you’re ready to tour the art and architecture of Central and South America’s most revered and awe-inspiring cathedrals and churches as part of your next cultural journey, contact us today to begin planning your once-in-a-lifetime trip to Latin America.