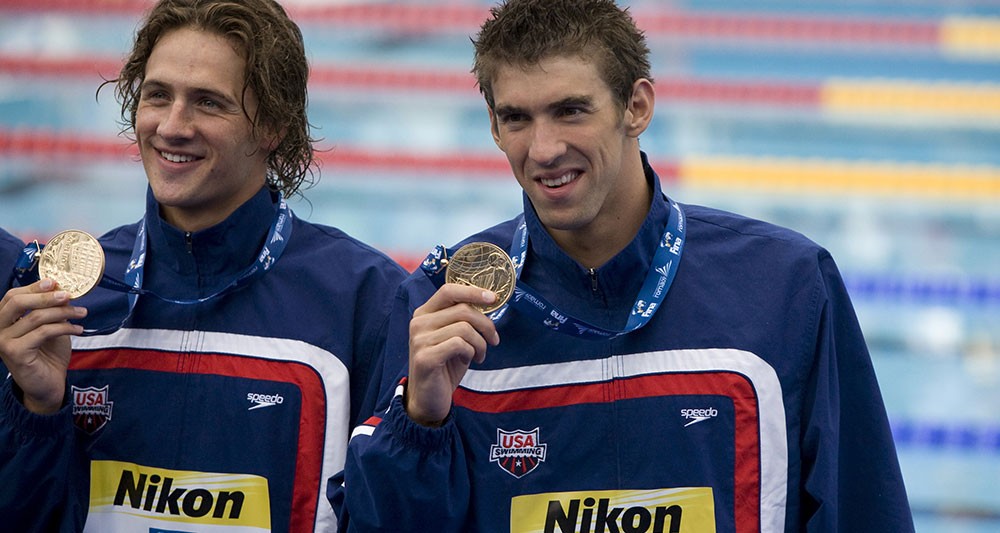 The first ever recorded Olympic Games were played in 776 BC in ancient Greece, and the modern Games began in 1896 with 14 countries and 241 naked men (of course, no women) participating in 43 events.

Held in Athens, Greece to honor the Olympiad legacy of the region, the modern Olympics have expanded beyond the original Summer Games to include winter sports and skipped around the globe every four years, watching heroism and heartbreak unfold on the international stage and giving rise to national heroes.

In honor of the upcoming 2016 Rio Summer Games in Brazil, we thought it would be fun to share our favorite Summer Games medalists of all time (in no particular order and not including any Winter Games athletes):

Swimmer Michael Phelps is the most decorated Olympian of all time. Say what you will about his personal life, including admittance of past marijuana use and a DUI arrest that resulted in a 6-month suspension and ongoing controversy, Phelps is the reigning champ when it comes to accumulated medals— 22 total with 18 Gold. With his longtime girlfriend expecting the couple’s first child, Phelps says he’s all grown up and looking forward to the 2016 Rio Summer Games, where he’ll defend the title of Greatest Swimmer in History and look to make the USA proud once again. 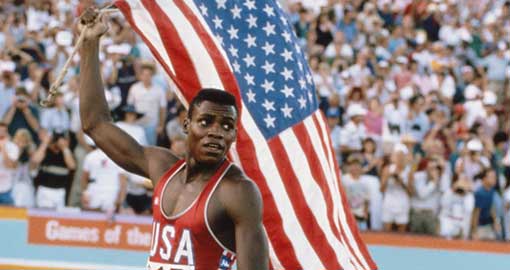 A member of the USA Track & Field Hall of Fame and no stranger to media controversy himself, multi-sport athlete Carl Lewis is arguably one of the most successful Olympic athletes of all time. He qualified for five separate Games (attending only four due to the U.S. boycott of the Moscow Games) and brought home 10 medals— nine of them Gold. He was a truly dominant long jumper and sprinter who also set numerous world records, including one for the indoor long jump that has yet to be broken. He was voted World Athlete of the Century by the IAAF and Olympian of the Century by Sports Illustrated. 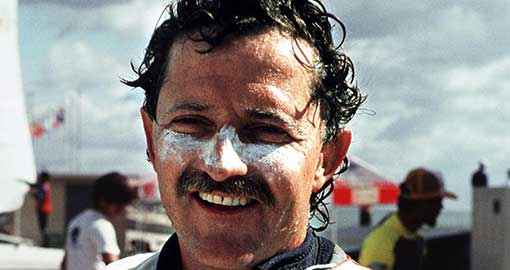 In true Canadian style, this gentleman sailor cared less about winning than he did about his fellow competitors during his second, and final, appearance in the Summer Games. During the 1988 Seoul Summer Games, two different races were underway on the same course when the wind picked up capsizing team Singapore’s boat and injuring two men. Lemieux was in second place in his own race and was a favorite to medal but saw the accident and turned back, deviating from course, to rescue the men and wait until a patrol boat arrived to get them. Despite this action, he still managed to claim 11th place, but it wasn’t enough for a medal. His actions did, however, net him the prestigious Pierre de Coubertin Medal for sportsmanship. 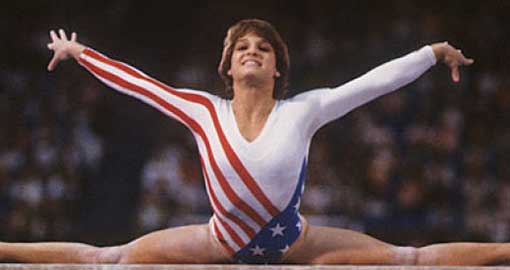 Ah, Mary Lou Retton. Record breaker, trend setter, gymnast. Who doesn’t remember her bobbed haircut or her Wheaties box. Only five weeks after undergoing a major knee surgery, Retton competed in the 1984 Los Angeles Summer Games and managed to pull out perfect 10s on both floor and vault, winning the All-Around Gold and ultimately winning four more medals, including two silvers and two bronze. She was the first American in history to win a Gold in gymnastics. In fact, she was the first female gymnast from outside Eastern Europe to take the individual All-Around Gold. She was also, incidentally, the first female athlete on the Wheaties box and spawned a haircut causing a whole generation of women to hide their 1984 school pictures. 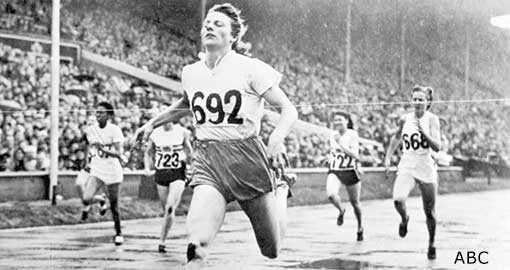 Dutch multi-sport athlete Francina “Fanny” Elsje Koen, better known as The Flying Dutchman, claimed four Gold medals in the 1948 London Summer Games, earning her bragging rights as the most successful athlete at that year’s summer Olympics. What’s more, she did it all as a 30-year-old mother of two at a time when female athletes were either sneered at or disregarded entirely. Koen set more than a dozen world records in the long jump, high jump, sprint and hurdles, and earned five European titles in addition to her four Olympic medals. In 1999, she was honored with the IAAF Female Athlete of the 20th Century award. She didn’t just break the glass ceiling, she high jumped right over it! 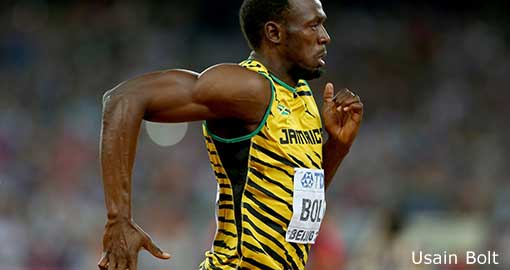 Jamaican sprinter and reigning Olympic champ, Usain Bolt is not only the fastest recorded person of all time, he’s also the first, and only, person to achieve a “double double,” winning both the 100 and 200 meter titles at consecutive Summer Games. He says the 2016 Rio Summer Games will be his last, and he’ll be retiring after next year’s World Championships, so he’s looking for that “triple triple” this year in Rio. Lightening Bolt has been named IAAF World Athlete of the Year and is the highest paid track and field athlete ever, but those aren’t the only reasons we love him. What are his retirement plans? This superhuman legend dreams of making a run at the English Premier League and his favorite team Manchester United. 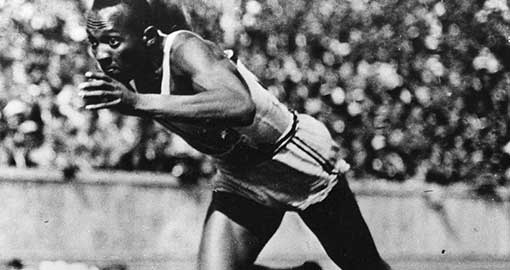 Perhaps the most recognized name in Olympic history, track and field star Jesse Owens competed in the 1936 Berlin Summer Games at a time when Hitler was ramping up his concept of Aryan supremacy. Although Owens arrived in Berlin amid cheers, it was easy to see how Hitler’s fervor could be intimidating, but Owens never let it phase him. He became the first American to win four Gold medals in a single Olympiad. Outside the Games, Owens won all 42 events at the 1935 Big Ten Track Meet during his junior year at Ohio State. This has been called “the greatest 45 minutes ever in sport.” He was awarded the Presidential Medal of Freedom by President Ford and, posthumously, the Congressional Medal of Honor by President GHW Bush. 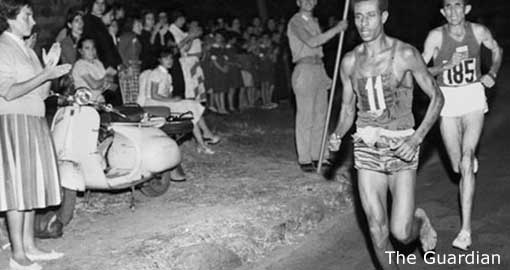 Ethiopian double Olympic marathon champion Abebe Bikila, was 28 years old when he burst onto the Olympic stage as a virtually unknown athlete in 1960. Sure, he was the first East African ever to win a medal but, what’s more, he also won it by running the 1960 Rome Summer Games barefoot! Amazingly, he almost didn’t make the final Ethiopian team at all and was actually a last minute substitution for a sick teammate. Bikila ended up shoeless because the official shoe sponsor didn’t have his size. He decided to run barefoot because that’s the way he’d trained at home in Africa anyway. Bikila went on to win Gold at the 1964 Tokyo Summer Games four years later— this time in shoes. 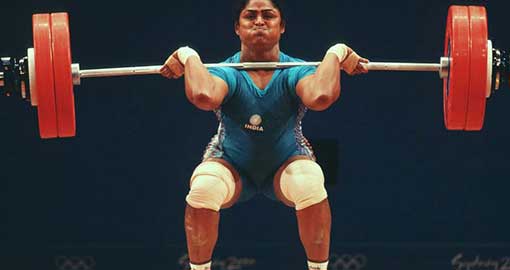 Another woman to bust through that glass ceiling is Indian weightlifter Karnam Malleswari. A repeated world champion throughout the 1990s, she became the first ever woman to medal in weightlifting at the 2000 Sydney Summer Games. This also made her the first Indian woman to win an Olympic medal. Sure, it was only a bronze, but we’d like to see you dead lift 240 kilograms! She was only the third individual medal winner from India and the event has become one of the most memorable Summer Games moments for the nation, also earning her India’s highest sporting honor, the Rajiv Gandhi Khel Ratna award. 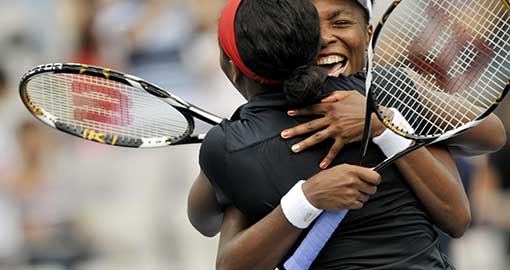 Last, but certainly not least, sister tennis phenoms Venus and Serena Williams round out our list of Olympic favorites. They’ve got four Gold each, the most of any tennis player, including one each for singles and three for for doubles all together. Despite earlier rumors at least one Williams sister may not make the trek to Rio for the Games, the pair has entered the doubles draw and there are whispers Serena may also complete in singles. This will likely be the last time the sisters will compete in an Olympic Games, so tennis fans will want to make the trip to see these Grand Slam champs take on the world this summer! 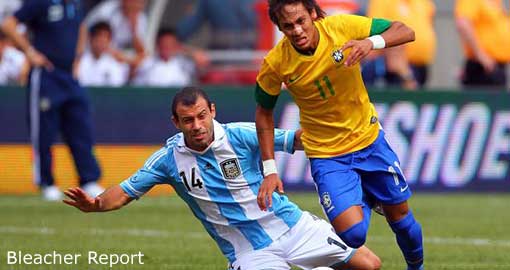 We couldn’t resist giving a nod to the home country’s national soccer team, which has never won a Gold in the Summer Games. Sure, they’ve taken three silvers and two bronze over the years, but Olympic Gold is the only international competition they haven’t yet won, giving them something to prove at the 2016 Rio Summer Games. It’s recently been reported international footballing star, Neymar, will be the squad’s captain, which is no surprise since he’s the reigning Brazil National Team captain. He will be taking one of the three allowed over age 23 spots on the team. Will it be their year? We’ll find out soon enough!

If you’d like to see Michael Phelps, Usain Bolt and Venus and Serena Williams up close and personal this August at the 2016 Rio Summer Games, there’s still time left to book hotels and apartments in Rio. Contact us today to secure your spot.