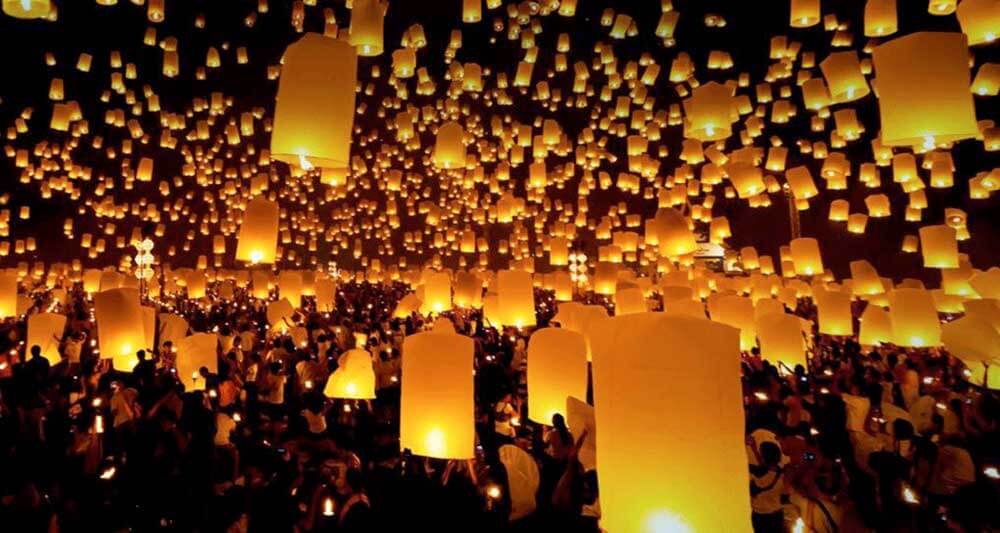 Our diverse team here at VIP Journeys celebrate “Latin America Christmas” in different ways depending on where they we’re born or where they live. We thought we would explore and share their local experiences with you.

For more than 2,000 years, Christians around the world have celebrated the birth of Jesus Christ annually on December 25. Today, Christmas retains most of its religious symbolism (and also some Pre-Christian pagan rituals) but has also evolved into a secular celebration for friends and families to catch up, spend time together and remember how much we care.

Here, in the United States, we mark the holiday by putting up and decorating a tree, stringing lights around our homes, sending holiday cards to loved ones, cooking spectacular meals, attending church services and (if you have little ones who were extra good last year) waking early Christmas morning to see what treasures Santa left in your stockings.

In South and Central America, where there are big populations of Roman Catholic residents, the season often lingers more than a month and is often marked by festive parades and events of religious significance. Many of these culminate on Christmas Eve with midnight mass and late night meals, but some stretch even into January to the traditional appearance of the three Wise Men.

Here are the highlights of Latin American Christmas traditions and some of our favorite customs you won’t want to miss:

In Argentina, Christmas is called “La Navidad” and Santa is known as “Papai Noels.” As with many South American countries, there is large Catholic population here, so holiday preparations mostly begin December 8 for the Feast of Immaculate Conception. Green, gold and red garlands and wreaths with white flowers adorn front doors, Christmas trees are put up (though they’re not always evergreens in Argentina and usually have cotton balls affixed to indicate snow even though it’s currently the middle of summer) and nativity scenes are installed. Christmas Eve is the evening for a late mass, very late (and often outdoor) dinner and fireworks to ring in Christmas Day. 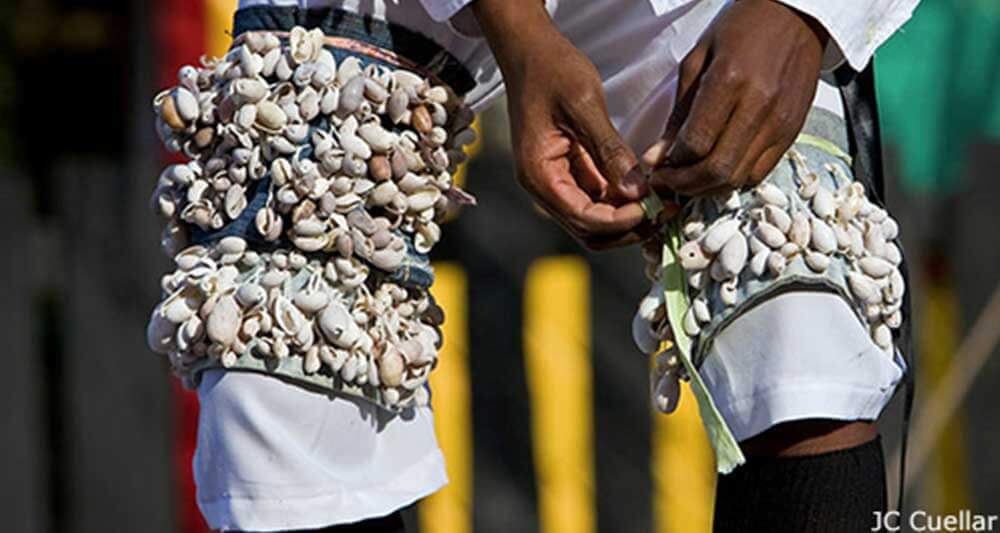 The tiny country of Belize is one of the most multicultural in all of Central and South America, so it’s not surprising the traditions and customs of Christmas also are widely varied. Most Belizean families celebrate with Christmas trees, lights and cards like here in the U.S. but the most important part of the holiday season in this Caribbean nation is that the two weeks preceding Christmas it is a time for family and friends to do a ton of visiting. In preparation, the whole family often pitches in to clean the home. It’s not uncommon for both rumpopo (their version of eggnog) and money to be pretty free-flowing during this time, leading up to Boxing Day when the country erupts with street festivals, parades and dancing in the streets.

Don’t Miss: The Maya in Santa Cruz do the Deer Dance for five nights beginning December 21; The Garifuna participate in the processional masquerade dance of Charikanari; The Mestizo celebrate Los Posadas— a 10-day procession bringing Mary and Joseph to a different house each night before arriving back at church on Christmas Eve. 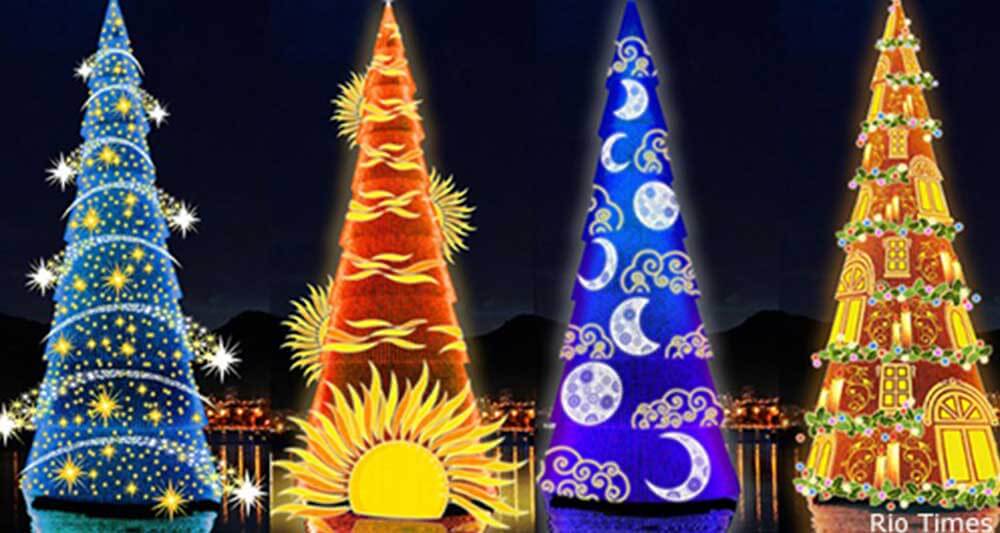 Although Brazil has a wide range of cultures living within its borders, it is perhaps the Portuguese heritage that is the most widespread and pronounced. Because of this background, many Christmas traditions in Brazil look very much like those of Europe and the United States but are very traditional. Nativity scenes called “presepio” are very popular, as is Christmas Eve midnight mass. Of course, everyone knows the Brazilians love any excuse to throw good party, and Christmas Eve, with its huge fireworks displays and technicolor electric light Christmas trees, is no exception.  Papai Noel exchanges gifts for a sock left near a window, and when everyone awakes the next day the whole family heads for the beach to relax and bask in the sun.

Don’t Miss: Christmas folk plays where the shepherds are female and there’s a gypsy who tries to steal baby Jesus; Secret Santa lasts the whole month of December with small gifts being given throughout the month with a big reveal Christmas Day. 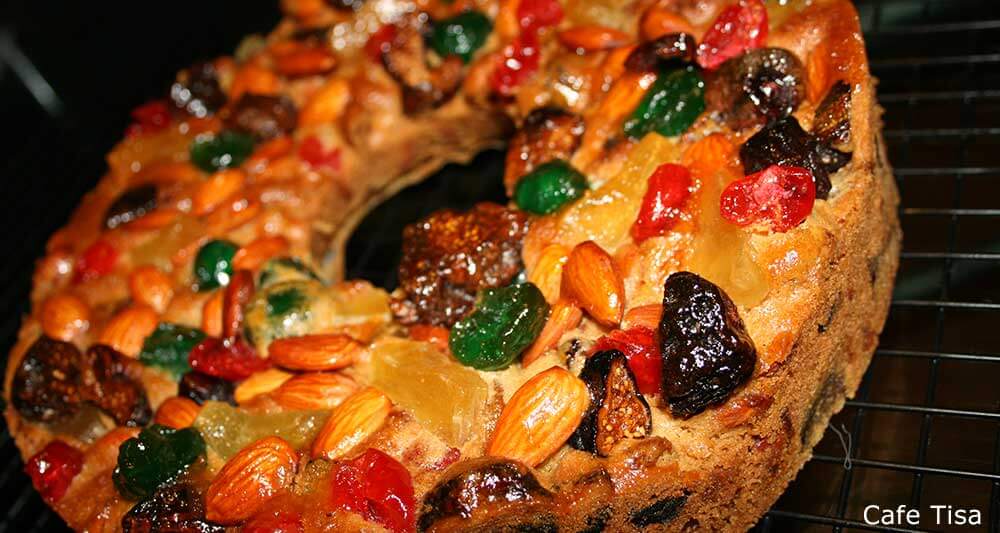 The weather is warm and the kids are out of school for summer vacation, so Christmas time in Chile is a time to get outside with friends and family. The country shares many Christmas customs with us here in the U.S., including nativity scenes, Christmas trees, lights on houses and even a smaller version of our Santa Claus. With a large Catholic population, Chile celebrates Advent and most residents attend church for Novena in the evenings for nine days leading up to Christmas. Christmas Eve brings a huge late meal (often asado or barbecue) before opening gifts at midnight. Everyone eats their weight in a special fruit cake called pan de pascua and washes it down with cola de mono (or monkey’s tail) an eggnog like grog many adults stay up to drink all night long.

Don’t Miss: Spend Christmas Day outdoors hiking, rock climbing or lounging at the park (it will help sweat out the monkey tail). 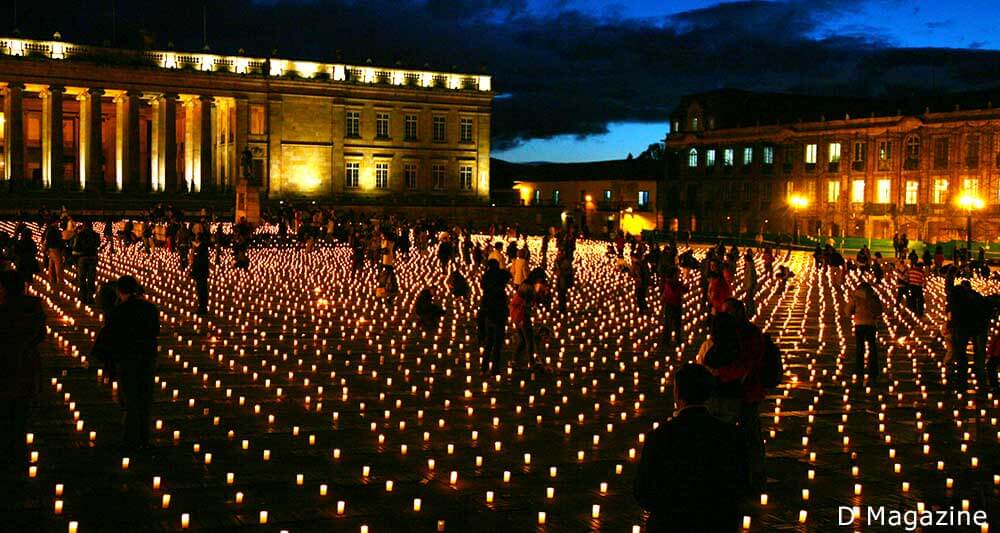 Colombia is a prime example of the country’s deeply rooted religious customs melding with more secular fiesta elements to create a one-of-a-kind celebration you’ll not find elsewhere in the world. The Christmas season in Colombia begins in early December and runs straight through the New Year’s Day. It’s a whirlwind of religious rituals combined with dancing, eating and drinking. Christmas trees are raised and decorated on December 16 when Novena begins, and candles, angels and lights are strung everywhere. Families gather to pray each night through Novena, culminating on Christmas Eve for mass after which baby Jesus (not Santa Claus) delivers gifts to children in place of letters left in the nativity.

Don’t Miss: Colombians also create paper lantern globos on Christmas Eve, but the most breathtaking light display actually comes early in the month on December 7 (or Day of the Candles) when they light thousands of thin candles on wooden boards throughout the city in honor of the immaculate conception. 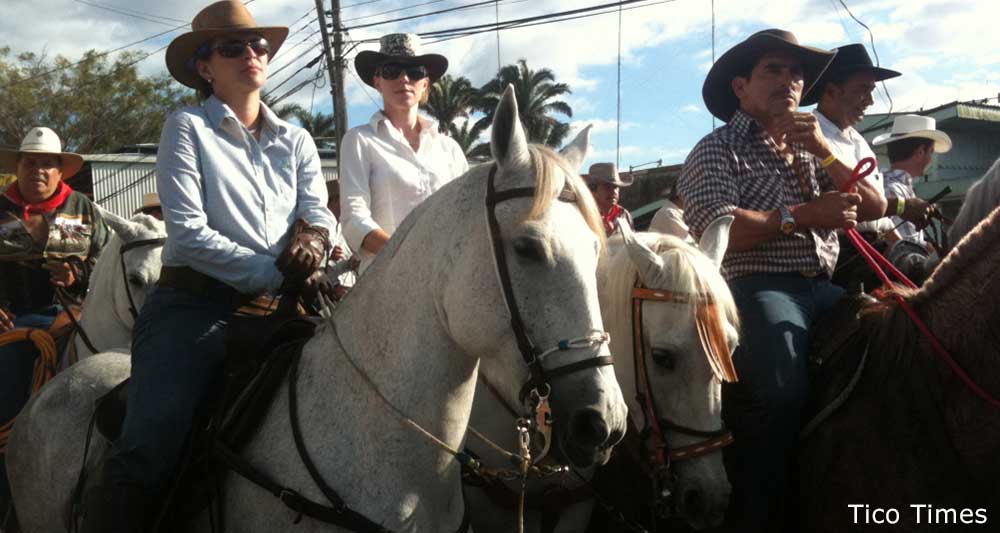 December in Costa Rica is not only the beginning of the holiday season but also the end of the school year, which makes the month even more festive and celebratory across the country. Homes are intricately decorated with tropical flowers, nativity scenes (sometimes with fruit and flowers), lights and cypress wreaths with red coffee berries— and the whole family pitches in to help. As with many Latin American countries, Christmas Eve mass is part of the tradition. In Costa Rica, families visit friends before attending mass and plan for dinner afterward, where tamales are a not-to-be-missed staple of the meal. Baby Jesus brings gifts that evening, and kids open them Christmas morning before the parades and festivals around Boxing Day begin. 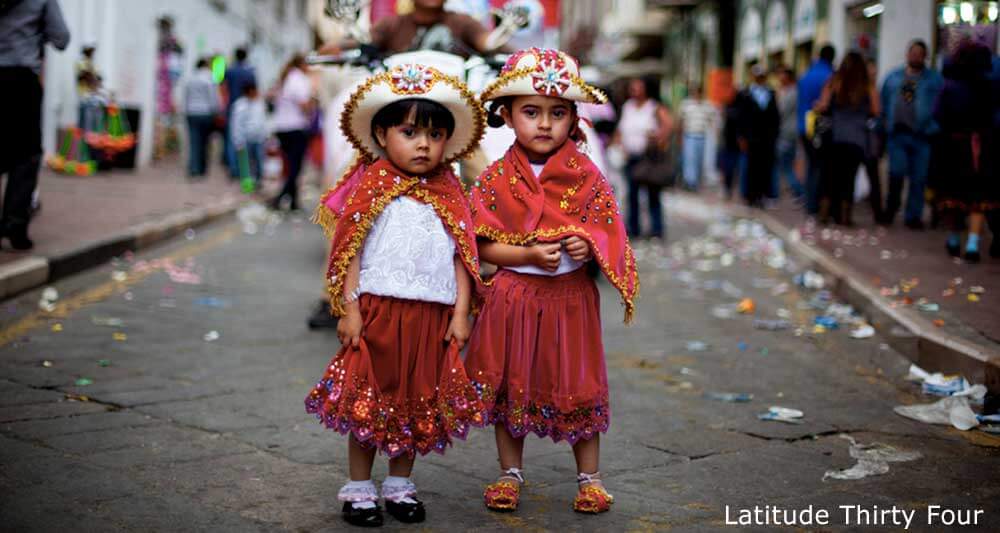 In Ecuador, December is the warmest time of year, which means outdoor activities and festivals abound. Sure, they largely decorate like we do in the United States, but they are much more traditional about it with Christmas being probably the most important holiday of the year. Nine days before Christmas Ecuadorians celebrate their own version of Novenas (like in Chile), where they spend each evening touring neighbor’s homes to view their creative nativity scenes. Carols are popular during this time as residents gear up for Christmas Eve, which is essentially a giant family reunion. Children put their Christmas wish lists in old shoes and Papa Noel replaces them with new shoes and gifts for Christmas Day.

Don’t Miss: The Christmas Eve festival in Cuenca. It’s very religion and family-oriented and totally amazing. You’ll be blown away; If you have a chance to try the maple cookies (called Prstinos) made especially for Christmas, you won’t regret it. 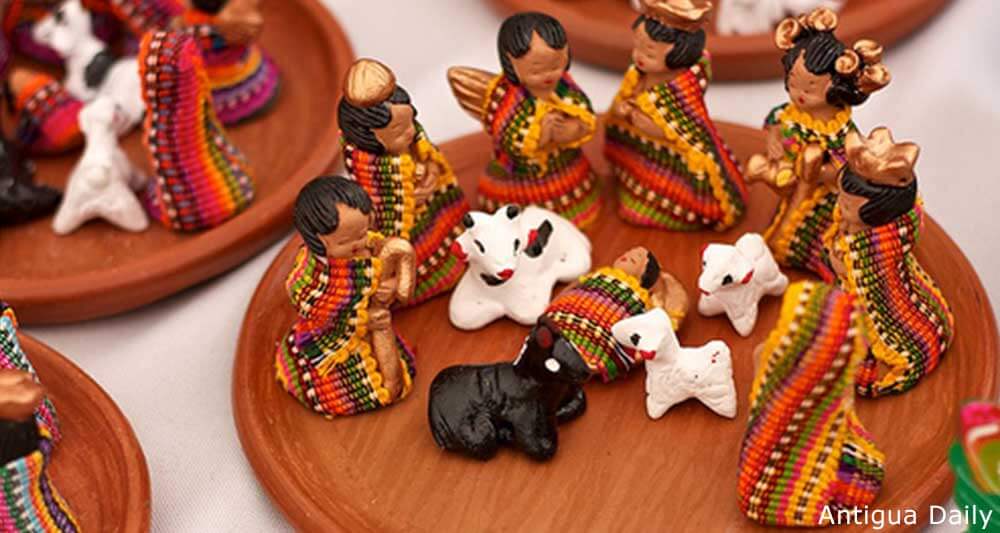 Guatemala is another very diverse country, with more than 20 distinct ethnic groups within its borders— each having its own customs and traditions. Even so, most residents create a nativity (called a nacimiento here) with their family and many include indigenous elements, brightly colored sawdust and clay figurines in the manger scene. Guatemalans also celebrate a version of Advent with a nine-day Novena culminating in one huge feast on Christmas Eve. Like Costa Rica, tamales always appear during this meal. After dinner, the whole family gathers to light fireworks at midnight, say a prayer around the tree and open children’s gifts (most adults won’t open gifts until New Year’s Day).

Don’t Miss: The Burning of the Devil held on December 7 each year to recognize the Immaculate Conception, symbolize re-birth and ward off evil spirits. Be sure to sweep your door afterward. Of course, fireworks go along with this. 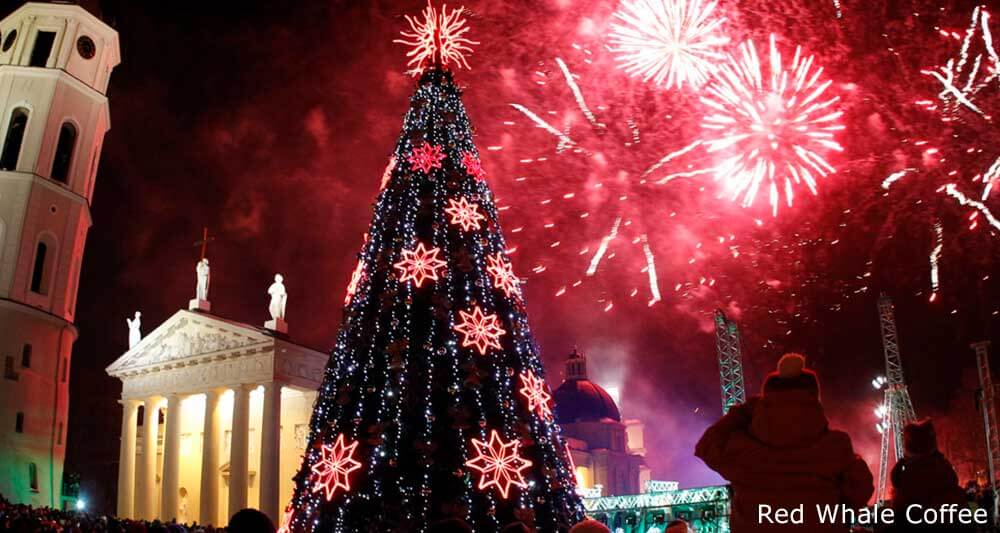 In what can only be described as an unusual bit of planning, the highly festive holiday season in Panama begins on December 8, which is both Immaculate Conception and Mother’s Day when little girls dress as angels and residents begin decorating for Christmas. Decor is very much in keeping with ours here Stateside if a bit more flamboyant, with Christmas trees, lighted homes and more—especially in the Canal Zone. There are highly festive parades and outdoor parties throughout the season, including fireworks on Christmas Day. Christmas Eve day is spent preparing for company and parties are likely to go into the wee hours and spill over into the streets. Many residents go to church Christmas morning before starting all over again. Children don’t open gifts here until King’s Day on January 6. 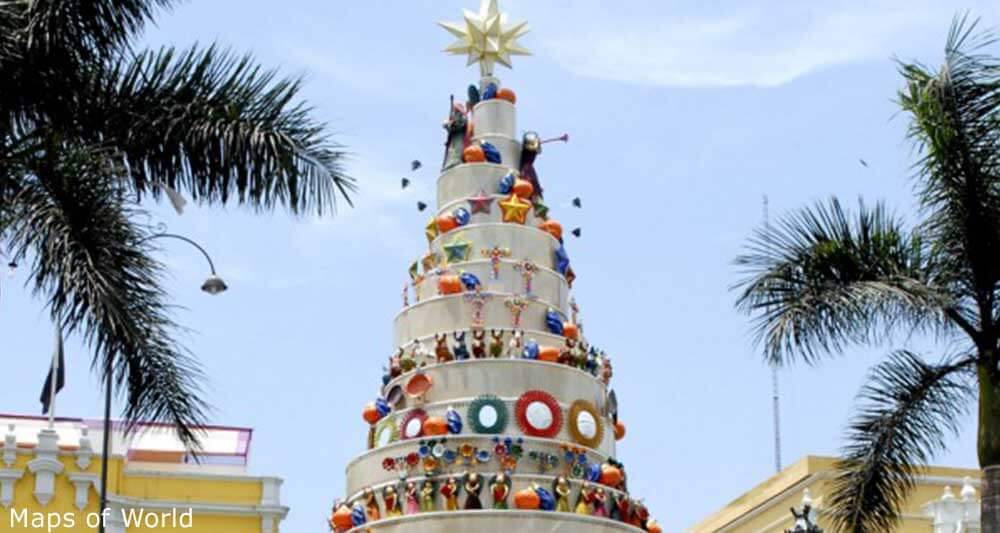 Said to be home to the first Christmas celebration in all of Latin America during the 16th century, Peru is a heavily Catholic country where the Western Santa and his likeness are actually banned.  For Peruvians, Christmas is truly a holy time and not nearly so commercialized as in the West and in other parts of Latin America. The main celebrations here take place on Christmas Eve after mass, when there is a huge feast before the kids go to bed and the adults stay up all night and sleep in on Christmas morning. Nativity scenes customized with indigenous animals are a major focal point in Peru, and a child is chosen to add Jesus to the manger on Christmas Eve. What gifts are exchanged are gathered around the nativity but (at least in the Andes) aren’t opened until January 6 when the arrival of the Wise Men is celebrated.

Don’t Miss: Peruvians love their fireworks and are notorious for shooting them at each other. It makes for quite a show…just keep an eye out. 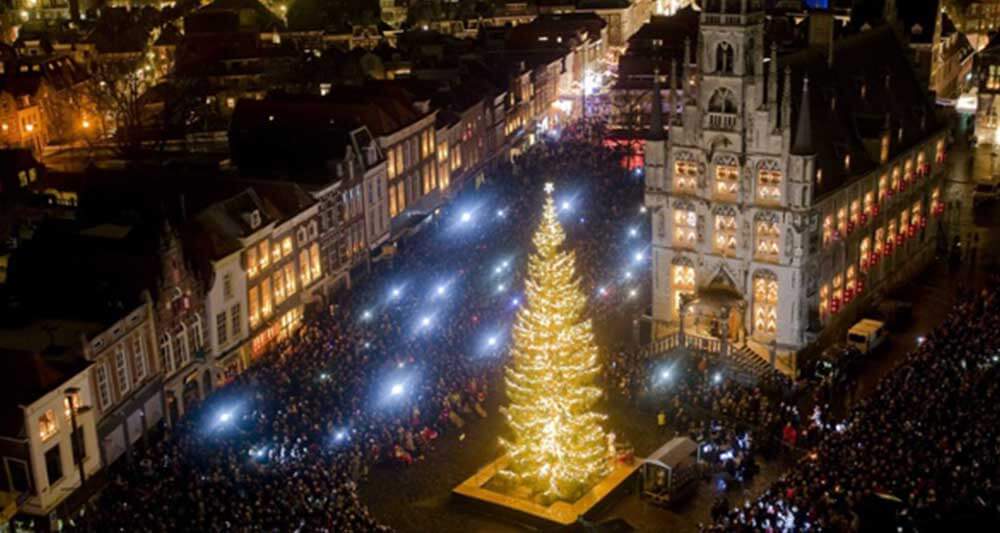 Perhaps one of the most secular countries in the world, Uruguay’s government doesn’t recognize Christmas, though it is a national holiday called Day of the Family. Nevertheless, Christmas decor and trees abound throughout the country, with December 8 being the historical day to raise the tree, and Santa (or Papa Noel) bringing gifts exactly at midnight. Uruguayans, who gather with family and friends for Christmas Eve dinner, famously distract the little ones for this annual tradition. Like many other Latin American countries, nativity scenes are popular here and are most often built in the fireplace since December is the peak of summer break in Uruguay.

Don’t Miss: You’ll be hard pressed to find a real tree in Uruguay but there are some pretty impressive artificial ones. It’s considered bad luck to keep one longer than seven years.

If you’d like to see some of these Christmas traditions firsthand, it’s never too soon to begin planning your dream journey. Contact us today to book 2017 holiday travel to Latin America.