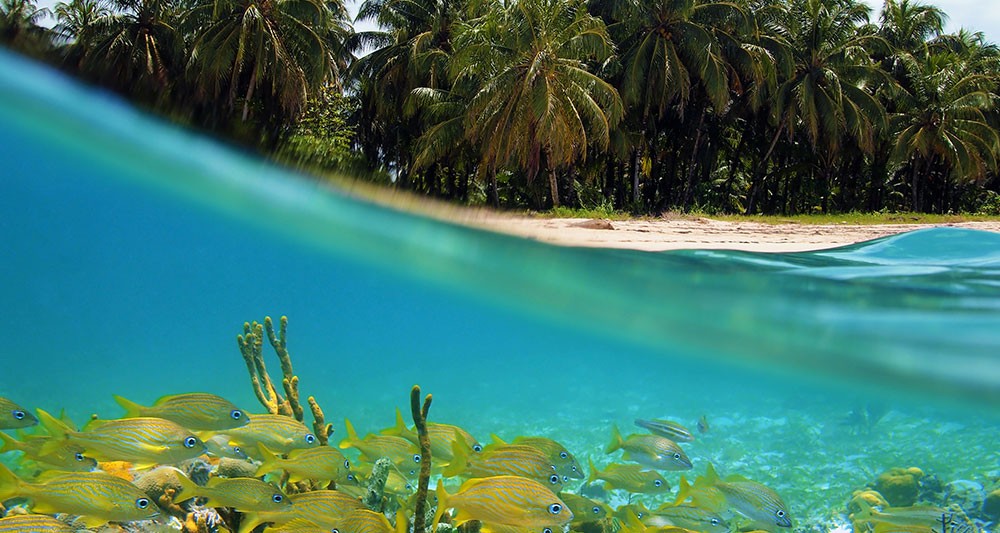 Favorite SCUBA and Snorkel Spots – There’s just something about being elbow to elbow under water with marine life that makes a person feel alive. From huge schools of tropical fish to large pelagic dinosaurs, nothing can quite compare to scuba diving and snorkeling in the deep blue sea.

Whether you prefer shore, wall, deep or some other variety of dive or snorkel, the waters off Central and South America boast some of the most intriguing and beautiful underwater scenery around. From the second and third largest barrier reefs in the world and some of the largest and most scenic marine reserve in the world, to a destination that’s repeatedly been called the “best in the world,” there is no shortage of premier dive and snorkel sites in Latin America.

Sure, there are sites off every destination in Central and South America, but here are some of our absolute favorites. Many of these are repeatedly on World’s Best lists, but a few are our little secrets:

Great Blue Hole: Multi colored stalagmites and stalactites with submerged caves in what is essentially a submarine vertical cave. There are steep walls with nurse sharks, giant grouper and shallow reefs with clear warm water. Best for advanced divers only.

Hol Chan Marine Reserve: Head for The Cut in the world’s second largest barrier reef to experience some of the most impressive diving and snorkeling around. Expect to see grouper, nurse sharks, rays, eels, bright coral and turtles so friendly they swim right up to your mask. Visibility can be more than 60 feet during the right season. It’s a pretty easy dive but tides can sometimes be strong.

Other great sites include Laughing Bird Caye near Placencia and Half Moon Caye. The truth of the matter is that you could spend months in Belize and never hit all the amazing SCUBA and snorkel sites available to you.

Pedras Secas: Located in the remote off-the-grid Fernando De Noronha, Pedras Secas is a submarine volcanic mountain known for its pristine tunnels, canyons and rocky bottom of 55+ feet below teeming with sea life, including squirrelfish, grunts and more. You may be the only divers at this distant paradise, and it will be well worth it as you dive amongst the rock formations that pierce the ocean horizon.

Providencia Island: What could be better than diving in a UNESCO World Heritage Preserve off Colombia’s department of San Andres. This 22-square mile Caribbean island chain is home to Providencia Island and the Seaflower Biosphere Reserve. There are numerous dive sites with visibility of nearly 100 feet and a biodiverse collection of marine life that is sure to make anyone’s bucket list.

Perhaps one of the most popular dive spots in the world, Cocos Island in Costa Rica boasts several dozen sites around is periphery, including Dirty Rock and, across the isle, Bajo Alcyone, which enjoys near year-round visibility of 65-100 feet in its 80-100-foot depths. Large schools of teeming tropical fish pool here, including yellowfin tuna and amberjack, as well as huge schools of hammerhead sharks.

Other popular sites off Costa Rica and in this general vicinity include Costa Rica’s Isla de Cano, which is surrounded by the largest number of coral building organisms on Costa Rica’s Pacific Coast, Nicaragua’s Corn Islands and Mary’s Place and Bay Islands, Honduras. Honduras and Nicaragua border Costa Rica and make great add-ons to a Costa Rican vacation. Whale sharks are a major draw in all these locales.

Often called “the Galapagos of the Caribbean,” Jardines de la Reina, Cuba is thought to be the third largest barrier reef system in the world– yet it’s largely unknown. It’s a mangrove and coral island system belonging to Cuba but about halfway to the Caymans with a substantial marine reserve at its core. Be prepared for bright corals, widely variant depths, schooling fish, large numbers of sharks and abundant ship wrecks. The area is highly regulated by Cuba but worth the red tape. Head for the mangroves to experience swimming with salt water crocs.

Although cold water diving is prevalent throughout the Galapagos Islands, world renowned hotspots include Grodon Rocks and, of course, Darwin’s Arch. Widely believed to be the best diving in the world, Darwin’s Arch ranges in depth from 30 to 130+ feet with average visibility ranging from 40 to 80 feet. Although the surge and current can be strong here, the experience is well worth it, with an abundance of large pelagic species, including whale sharks, tiger sharks, Galapagos sharks, turtles, sea lions, fur seals and manta rays. This area is known for huge schools of hammerhead sharks, but there are no reefs here.

There aren’t many places you can dive the Caribbean and Pacific in the same day, but get ready for a back-to-back dive in Panama. Bocas del Toro, despite its occasionally strong currents, boasts some of the best diving and snorkeling in Central America–especially in Bastimentos Marine Reserve. Bocas is outside the hurricane zone and away from large cities, which makes for near virgin reefs in some areas. In fact, it’s estimated 95 percent of coral species found in the Caribbean are found here. Portobelo National Marine Park has sunken ships and coral reefs, while Coiba in the Pacific is widely compared to Galapagos.

If you’re ready to dip your toes in the surf of Central and South America, call us today to begin planning your SCUBA or snorkel trip.