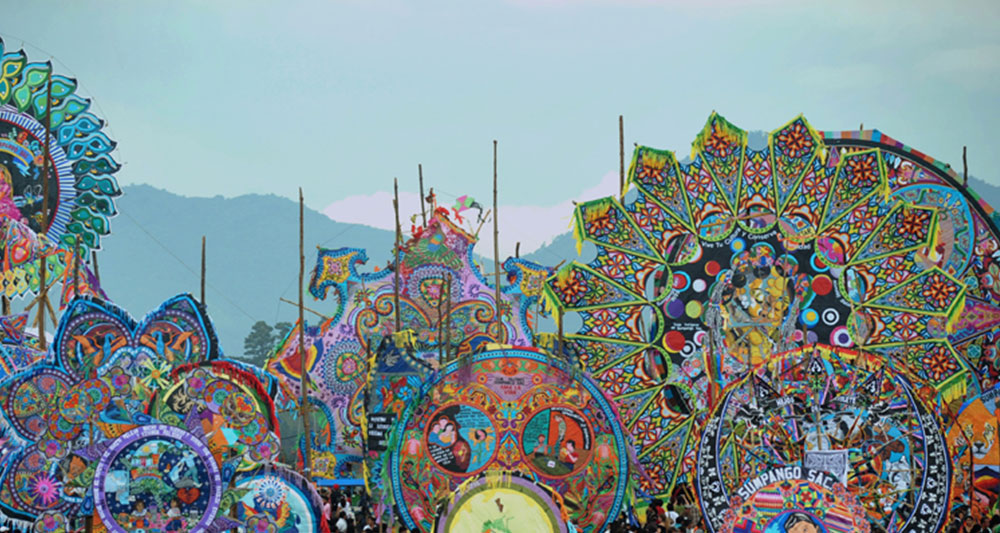 Dia de los Muertos Celebrations in Latin America – As we, here in the U.S., gear up for Halloween by donning our spookiest costumes, most bone-chilling makeup and our biggest candy collection buckets to head out and solicit treats from neighbors or party the night away with friends, our neighbors to the south are making preparations of their own.

On the surface, Dia de los Muertos, or Day of the Dead, looks a lot like Halloween, and some Latin American countries even are beginning to integrate trick-or-treating into the more traditional festivities. But, Dia de los Muertos, which has its roots in indigenous pre-Colombian rituals and was merged with Catholicism brought to the New World by Spanish conquistadors, is actually quite different from the Northern European tradition of All Hallow’s Eve.

Added to the UNESCO Representative List of the Intangible Cultural Heritage of Humanity in 2008, Dia de los Muertos takes place around All Saint’s Day on November 1 and All Soul’s Day on November 2. This joyous, if somewhat macabre, holiday celebrates and honors family and friends who have passed on during the time of year many ancient civilizations believe the veil between worlds in the thinnest. Although specifics vary from region to region, it is widely believed the dead are insulted by sadness and mourning and return from eternal slumber to once again become a spirited part of the community during this period.

Some cultures construct altars in their homes to decorate with the deceased favorite food and drinks, flowers, pictures, candles and wash basins, while others clean and decorate grave sites before enjoying a picnic with their loved ones who have crossed over. Some fly giant kites, while others share funny stories in remembrance. But all maintain a happy ambiance that recognizes death as a natural part of life.

Perhaps the most recognizable symbol of Dia de los Muertos is the calacas (skeletons) and calaveras (skulls). Typically portrayed in fancy dress and humorous situations, these appear virtually everywhere during the holiday, including carvings, sweet treats, masks, dolls, kites and more. It is believed this artistic flair stems from the ancient indigenous tradition of keeping skulls as trophies and using them to symbolize life, death and re-birth. In fact, some cultures still keep skulls today! Another popular symbol of the holiday is the bright orange marigold, which you’ll find marking the graves of adults, on numerous altars and being sold by many a street vendor at the gates of cemeteries.

If you’d like to get a glimpse of traditional Day of the Dead celebrations but stay out of the crowded parties in Mexico, where Day of the Dead is most widely recognized, there are several celebrations in Central and South America we recommend. From the rowdy festival-like atmosphere of Lima, Peru, to the subdued finados of Rio, here are a few of our favorite Dia de los Muertos celebrations in Latin America:

Day of the Dead is a family-oriented holiday in Guatemala with visits to the cemetery to clean and decorate the graves of loved ones before enjoying a picnic of fiambre (a salad of up to 50 ingredients only made this time of year). But, that doesn’t mean visitors won’t find a happy and festive atmosphere. Although there will definitely be music and dancing, the absolute highlight of a trip to Santiago Sacatepéquez and Sumpango is the huge Mayan kites flown with handwritten messages attached to communicate with the dead. With some kites as big as 30 feet tall, locals begin constructing these colorful kites out of all natural materials a full 40 days before the holiday.

In Peru, the celebration of Dia de los Muertos is primarily an Andean tradition marked by staying up all night to party with deceased loved ones in the graveyard. Today, many Andean immigrants have migrated to the Lima metropolitan area, making the Lima Day of the Dead festivities the largest in Peru. Peruvians from across the country and beyond flock to Lima to celebrate in local cemeteries, but Cemetery Nueva Esperanza (one of the largest graveyards in the world) plays host to the biggest Dia de los Muertos celebration in Peru, transforming into a street festival of sorts with folk artists, musicians and street vendors arriving after dark for the party.

In Ecuador, the holiday is known as Dia de los Difuntos, or Day of the Ancestors, and it’s celebrated by visiting the cemetery in fancy dress to share a meal on top of the graves of loved ones. A plate always is left for those who have passed on, including traditional fare such as gauguas de pan (decorated bread babies sometimes filled with jam or cheese) and colada morada (a purple oatmeal drink of blackberries, blueberries, cloves, cinnamon and sometimes other fruits and spices). The small Andean villages provide the most traditional look at Dia de los Dinfuntos, but visiting Quito’s San Diego Cemetery (sometimes called the Corner of Souls and one of the country’s oldest cemeteries) allows access to hundreds of families dancing, singing and eating while celebrating their ancestors.

In Rio, Day of the Dead is a national holiday called finados and the festivities actually are somewhat subdued by Brazilian standards. Here, families mark the occasion by visiting the tombs of loved ones and leaving food, drinks and thousands of flickering candles, making for quite an impressive and beautiful site at cemeteries throughout the city. As night falls, Day of the Dead parties do begin to dot the streets— though much smaller and more spread out than Carnival celebrations (as a reference point for those who have experienced the world’s largest party). You aren’t likely to find a lot of traditional garb in Rio; for that, you’ll need to venture to smaller towns and villages.

Winning the award for most macabre of them all is the traditional Andean practice of keeping the skulls of ancestors to watch over the family and then decorate and honor with offerings before bringing them to the cemetery during Fiestas de las Natitas (Day of the Skulls). Believed to bring good luck and protection to the family, Day of the Skulls is an off-shoot of Day of the Dead and not celebrated by everyone in Bolivia, but those who do participate in this unique ritual do so about a week after Dia de los Muertos, so it is possible to catch Day of the Dead in Peru or Ecuador and then head to Bolivia for Day of the Skulls.

Tired of trick-or-treating and want to experience Day of the Dead instead? Call us today to begin planning your Dia de los Muertos themed tour of Central or South America!